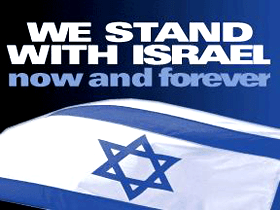 Just over a week ago, PC USA (Presbyterian Church USA) held its biennial 2014 General Assembly in Detroit. The result of the weeklong gathering of delegates, leaders and other participants is still having major ripple effects within the Christian community at large. I was already concerned when I blogged on the topic last February as well as April when I did a review of their DVD/booklet pre-general assembly package titled "Zionism Unsettled".

Amidst several resolutions that undoubtedly will change the face of slowly dying PC USA and most likely will result in a departure from many and even a split, resolution 04-04 was the one that after several hours of a rhetorical ping pong match, resulted in a vote in favor of divestment. The margin was a very small one of only 7 votes out of over 600. The financial ramifications due to the divestment from Motorola, HP, and Caterpillar are not really an issue. The motive behind the move is what really matters.

Frankly, this "victory" for those within PC USA who support BDS isn't really the issue. The last GA (General Assembly) of 2012 saw the same resolution fail by only two votes. It could even be argued that resolution 04-04 passed as a result of the 2012 departure of many strong evangelical supporters of Israel from PC USA In both cases of either the defeat of 2012 or the victory of 2014, nearly 50% of the members favored BDS. That number is what should really concern us.

PC USA joins other denominations in a bold move against Israel. Mennonites and Quakers have been very involved in anti-Zionism and divestment for years now, and they are also joined by some within the Methodist denomination. Of course, it is always dangerous to paint with broad strokes, so I must clearly state that not all people within these groups are anti-Israel. But 50% of the PC USA being in favor of BDS (Boycott Divestment Sanctions) forces me to admit that the brush used for libelous hatred just got a bit wider.

PC USA supporters of divestment are not necessarily excited about all the praise they have been receiving from various groups around the world who clearly want to see the Jews all gone from the face of the earth. Even former KKK grand wizard  David Duke congratulated PC USA on their decision.

Why haven't we seen any PC USA divestment or boycott from companies like Cisco or Google who are doing business with the Palestinian authority? The same Palestinian Authority who just signed an agreement to have Hamas and Fatah co-lead in the region. Additionally, I wonder if PC USA proponents of BDS will refrain from using other Israeli made or invented products like cell phones, or USB thumb drives to name just a couple?

This has been such a biased case against Israel that it is very difficult not to see the anti-Semitic thread driving the whole move.  The farce that was the 2014 PC USA GA was painful to watch, as no scripture was ever used to back up their pseudo-Christian move to divest. Why? Because none can be found and used with a straight face. Instead, they would rather side with the "oppressed" Palestinians against the "oppressors" from Israel. Like it or not, this latest move aligns the pro-BDS voters with Hamas.

Talk show host and author Hugh Hewitt is right when he states: "…Look in vain for any serious question that is genuinely “frequently asked,” such as “What does the PC USA think about the Hamas charter? “What does the PC USA think about the wave of suicide bombings that led to the construction of the security wall on the West Bank and the dramatic decline in fatalities and terrible woundings that followed?”; “Why doesn’t the PC USA condemn the genocidal rhetoric of the Iranian theocracy and the indiscriminate use of missiles and rockets by their puppet terrorist organization Hezbollah against Israeli civilians or the similar use of rockets by Hamas from Gaza?”

The same Hamas that keeps showering Israel with rockets almost daily is most likely responsible for the kidnapping of the three Israeli teenagers whose bodies were tragically found dead today. My heartfelt prayers go to the families of the deceased as well as to Benjamin Netanyahu and his cabinet for wisdom in how to respond. Will this affect PC USA recent one-sidedness? Don't hold your breath!

PC USA might very well be a dying Christian denomination but this shouldn't prevent them from leaving a legacy that would be a testimony of their love for Israel and the Jewish people. This will not be the case, I am afraid! In a day and age when Christian friends of Israel are few and far in between, I grieve the loss of yet more of our friends, but this doesn't come as a surprise. As PC USA took sides, they validated terrorism and anti-Semitism if not by direct actions, at least by association.

They remain accountable to the God of Abraham, Isaac, and Jacob for a decision that flies in the face of biblical truth. They no longer represent what it means to be a genuine follower of Yeshua the Messiah (if they ever did!)

Their last claim to fame will be a claim to shame!

Next
Is there a link between Fatah, Hamas and the current US administration?