Matthew 24 is for the Jews 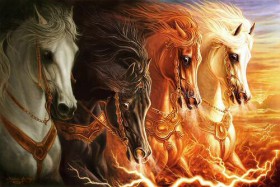 It's a sad fact that many people who read the Olivet Discourse in Matthew 24 will make the assumption that this is referring to the Church at the close of this age in some way. I’ve heard Pastors and Teachers preach and teach that this is about the Church in their sermons. But that is not the correct view; in the light of the historical facts, and timing for this portion of scripture. The very thing many people miss right off is there was no New Testament Church when Yeshua gave the Olivet Discourse! That’s right, there was no New Testament at the time Yeshua spoke those words. And it is not some unknowable riddle as to what Matthew 24 is showing, once you realize this time period is showing, the Tribulation, and (then) the setting up of the coming earthly Kingdom for Israel. May your heart be swift to hear and understand just how absent the Church is in Matthew 24!

So what have people overlooked here? What have they forgotten that is so important? It is the fact that when Yeshua spoke about these things he hadn’t died yet, and the veil was not yet torn in two. And in Hebrews 9:17 it declares, “For a testament is of force after men are dead: otherwise it is of no strength at all while the testator liveth.” So the Bible itself tells us that; when Yeshua said these words he could not have been referring to the Church. The New Testament Church as having Gentiles in it would come later, after the death and resurrection of Yeshua. Matthew 24 was fully directed at the Jews, and it explains what will happen to the Jewish Nation right before the setting up of the earthly kingdom of heaven on earth.

As the New Testament Church wasn't there when Yeshua spoke those words; neither will the Church be on the earth when those words are fulfilled.

This (Tribulation) time period as seen in Matthew 24 is showing the 7 years, known as Daniels 70th week. Daniel said, “Seventy weeks are determined upon thy people and upon thy holy city…” (Daniel 9:24). This puts the time period of this 7 years, as having everything to do with the Jews and the holy city of Jerusalem. There isn’t any disclaimer that says another group of New Testament believers are to be included in this. No, just the Jews and the Holy City of Jerusalem. People should put their pencils away and quit trying to write the Church into these events that are so clearly marked for the Nation of Israel.

It is important to note that in looking at Matthew 10:5-7, when Yeshua sent out his disciples, he sent them out to the Jews only. He told them to not go to the gentiles. Yeshua said, “And as ye go, preach, saying, The kingdom of heaven is at hand.” (Matthew 10:5-7). So here we have Yeshua telling the disciples to go to, the lost sheep of the house of Israel. It really is not that complicated an answer as to why he did that. Yeshua was offering the earthly, kingdom of heaven, to the Jews FIRST, which they rejected. So when you look at Matthew 24:14 (it goes back to the Jews again preaching, the earthly gospel of the kingdom, but now in the Tribulation, because the Church is gone.) It’s the earthly kingdom, again, that is being offered during the tribulation. The Church with the better covenant is already gone from the earth and is missing in this because we believe in the Gospel of our Lord and Savior Yeshua the Messiah. The kingdom of heaven is about the earthly kingdom. The kingdom of God, includes both the things in heaven and earth, it’s the larger picture and does include the Church. But here in Matthew 24 it shows what happens to the Jews right before the setting up of the earthly Kingdom for the Jewish Nation. Fulfilling the promises foretold of old, that they would inherit the land forever. (Genesis 13:14-17).

When looking at Matthew 24 we see the two parts of Daniel's 70th week for the whole Tribulation:

The 4 horsemen of Revelation and Matthew 24

The first half of the Tribulation is caused mainly by the wickedness of man, and, are connected to the 4 horsemen of Revelation 6:1-11.

1. The rider upon the white horse is a man in Revelation 6:2. "…and behold a white horse: and he that sat on him had a bow; and a crown was given unto him: and he went forth conquering, and to conquer." This connects to Matthew 24:4 where it says "…Take heed that no man deceive you." This is the anti-Christ coming to power over the dominion of men, deceiving the whole world, and especially the Jews.

2. The rider upon the red horse in Revelation 6:3-4 shows that he goes out "…to take peace from the earth…" This connects to Matthew 24:6-7 "And ye shall hear of wars and rumors of wars…"

3. The rider upon the black horse in Revelation 6:5-6, "…and I beheld, and lo a black horse; and he that sat on him had a pair of balances in his hand." This connects to Matthew 24:7 where it says, "…and there shall be famines, and pestilences, and earthquakes, in diverse places." It is interesting that earthquakes are mentioned here, as man can now cause earthquakes, using HARRP in Alaska. Even Russia has this capability. But the main point is that; there will be famine as revealed in both Matthew 24:7 & Revelation 6:5-6.

4. The rider upon the pale horse in Revelation 6:7-9, "And I looked, and behold a pale horse: and his name that sat on him was Death, and Hell followed with him. And power was given unto them over the fourth part of the earth, to kill with sword, and with hunger, and with the beasts of the earth." In Matthew 24:9-10 it says, "Then shall they deliver you up to be afflicted, and shall kill you: and ye shall be hated of all nations for my name's sake. And then shall many be offended, and shall betray one another, and shall hate one another."

The Great Tribulation or Second Half of Daniel's 70th week

After the four horsemen, the Tribulation becomes 'The Great Tribulation' for the second half of Daniel's 70th week. All these things up to Matthew 24:14 were caused mostly by the wickedness of man on the earth. And these are only the beginning of sorrows! The dividing line for the midpoint of the Tribulation is when the anti-Christ goes into the temple in Jerusalem, in verse 15. The anti-Christ then rules unencumbered for 42 months, or three and a half years (Revelation 13:5).

Some highlights of what the Jewish Nation will endure:

"Then let them which be in Judaea flee into the mountains" (Matthew 24:16). These are the Jews from the land of Israel who are being told to flee, it certainly isn't talking about the Church.

"…but for the elect's sake those days shall be shortened." (Matthew 24:22). Simply put, after the Church is in heaven, the Jews become the elect again on earth.

"Immediately after the tribulation of those days shall the sun be darkened, and the moon shall not give her light,…" (Matthew 24:29). It is the Jews that will be gathered in the day of darkness, as it was foretold (Ezekiel 34:12-13). The Church will not be left, in that daunting and darksome day, because the Church is the light of the world, and was caught up to heaven in the rapture 7 years ago. The Church is preparing to ride down from the halls of heaven, to the mortal shores of the earth! Riding upon white horses as part of the armies of heaven (Revelation 19:14).

Yeshua as Son of Man and Son of God

From Matthew 24:27-44 the emphasis is on the coming of the Son of man. The term Son of God was not used here because Yeshua is dealing with the Jews, showing yet again the Church is not on earth at this time.

"Then shall two be in the field; the one shall be taken, and the other left" (Matthew 24:40). Yeshua told the angels, to first gather out the tares; those that offend, them which do iniquity, and to sever the wicked from among the just (Matthew 13:30, 13:40-41, 13:49-50). This clearly doesn't concern the Church because she was raptured 7 years prior to this. Some like to refer to this as the rapture, but this is actually judgment upon the wicked that are still on earth when Yeshua returns. The angels are told to put the tares in bundles and then cast them in the fire (Matthew 13: 40-42).

"Who then is a faithful and wise servant,…" In verses 45-50 This phrase is used four times. Yeshua is referring to the Jews at the end of the Tribulation. Yeshua called the Apostles friends and not servants starting in John 15:15.

It could be written and it could be said, that Matthew 25 continues on with the same view. It starts out with the word, then, to show it follows Matthew 24 in sequence.

The 10 virgins are understood, when they are viewed in the Jewish light of the virgin daughters of Zion. The five wise are Jewish believers who will go forth, in the day of darkness with actual oil in their lamps. The five foolish say in their hearts the Lord will not do good nor evil since they don't believe (Zephaniah 1:12). Over and above this; it's a sin to think the Holy Spirit can be bought, so this is not talking about some in the Church going and purchasing the Holy Spirit (acts 8:18-24). The Oil in the lamps is now literal because the Holy Spirit already went to heaven with the Church in the rapture.

As Matthew 25 goes on, it talks about the judgment of the nations:

The Lord comes with the angels and sits upon the throne of his glory. (Matthew 25:31)

He will separate the sheep from the goats. (Matthew 25:32)

This is for those who are still alive on earth at the setting up of the earthly kingdom. (Matthew 25:33)

The King shall say unto them on his right hand, "Come, ye blessed of my Father, inherit the kingdom prepared for you (from) the foundation of the world:" (Matthew 25:34)

The Church is not here because we were chosen (before) the foundation of the world (Ephesians 1:3-4).

All Nations will now be judged for how they treated the Jews. (Matthew 25:41)

All of these concepts have to do with the Jews, and how they were treated during the Tribulation, and the setting up of the kingdom.

The scriptures keep showing us how the earthly kingdom is to be set up as promised to the Jews.

Remember, the Church is entirely missing in Matthew 24, as she was never there to hear those words! As the age of grace followed the words spoken, and as the Church gracefully departs this world before they're brought about.

Time doesn't allow us to go into every aspect of Matthew 24 and Matthew 25. But seeing all these consistent patterns connecting to the Jewish Nation, we see how foolish it is to try and put the Church into any of this, and especially when there wasn't a New Testament Church at the time Yeshua said these things.

Author of 'Precepts of the Blessed Hope'