Holocaust Memory: What Would Elie Wiesel Do? 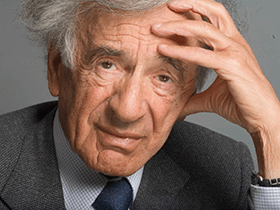 Eliezer Wiesel was born in 1928 in Romania. He was fifteen when he and his whole family were deported to Auschwitz. He spent most of his internment in the camps at Auschwitz and Buchenwald, with his father Shlomo. Elie Wiesel survived the horrors of the Holocaust. He was greatly motivated by the desire to take care of his beloved father who unfortunately died in Buchenwald just a few weeks before the liberation of that camp. One of his three sisters and his mother also perished in the camps. Elie had become a Holocaust survivor and an orphan at age 17.

Elie Wiesel passed away on July 2nd, 2016 at the age of 87. In a sense, the passing of this giant is the silencing of one voice who for six decades, as he continued to live through the nightmares of his gruesome experience, chose to perpetuate Holocaust memory in any way he could. He leaves behind him 57 books, too numerous to list or recommend here except for Night, written in 1960, that should be a must-read for everyone. 'Night' is Elie Wiesel's memoir of his time in the Death Camps with his father. Among the myriad of awards and recognitions that he accumulated over the years, Wiesel received the Nobel Peace prize in 1986. But to him, even in his last days, much remained to be accomplished to remember the past and alleviate a similar future.

To Wiesel, apathy or indifference was one of the worst evil in the world.   That is exactly why he spent the bulk of his life educating a world in shock that later morphed into a numb world to eventually become the postmodern world in denial that it currently is. He once said "I decided to devote my life to telling the story because I felt that having survived I owe something to the dead. and anyone who does not remember betrays them again."  He had always felt guilty of not being able to do more for his dad during their imprisonment in the camps. He felt that he didn't deserve to live as he also wrote, "I survived the Holocaust and went on to love beautiful girls, to talk, to write, to have toast and tea and live my life – that is what is abnormal."

Beyond a powerful legacy, he leaves us with a tremendous challenge. We must continue his fight.  If we remain silent, his voice will fade away into oblivion or worse, get relegated to a couple of statements about an event that many are already starting to doubt. The world cannot afford to be silent, apathetic or indifferent.

The Holocaust took place more than 75 years ago which means that any survivor still alive today would be at least 75 years old–as unlikely as it might be–if they were born in the camps. The average age of all Holocaust survivors today is closer to 80. Logically, the 500,000 worldwide Holocaust survivors, will all be gone within ten years…and then what? I fear that beyond the respectful eulogies and posthumous accolades Wiesel receives, people will quickly move back to their busy lives and allow the revisionists and antisemites to win the next battle.

We must continue to educate people about the Holocaust. There are numerous Holocaust memorials and museums throughout the world, many of them in the United-States. The United States Holocaust Memorial Museum in Washington, D.C (whose founding chairman was Elie Wiesel) is one of them. Visit the one nearest you and make sure you accompany yourselves with some people from the next generation. This goes along with Wiesel's statement that "Without memory, there is no culture. Without memory, there would be no civilization, no society, no future."

We must also continue to speak up against any form of xenophobia, being antisemitism or any other kind. Wiesel came out of the camps barely alive, but he still had enough breath to keep fighting. He wasn't only the ambassador of Holocaust remembrance but also spoke against any and all ills rooted in racism. The current threat of a global annihilation of Israel and the Jews is very real. Europe is on high alert, Israel has been on edge since 1948 and the rest of the world can often be found on the forefront of the new antisemitism, blindly demonizing the Jews. Be aware and sensitive to what is happening in your own community and be responsive to defend and even lend a hand when needed. It is always appropriate to reach out and help those in need, even if they turn you down, your intentions will not go unnoticed.

Next
Southern Baptists Support Israel “For Such a Time as This!”