Saviors shall come to Mount Zion 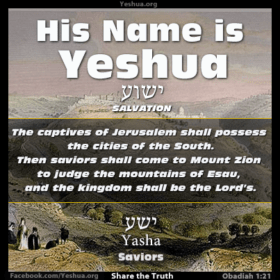 The name Obadiah means "worshiper of God," or "worshiper of Jehovah (YHWH)," more literally, or Yahweh. So, it is a very beautiful name.

Obadiah is one of four prophets about whom we know absolutely nothing, except that he wrote prophecy in what is the shortest book in the Bible.

Perhaps the most curious passage of Obadiah is at the very end of the chapter:

Then saviors shall come to Mount Zion
To judge the mountains of Esau,
And the kingdom shall be the LORD’s.
-Obadiah 21

In Hebrew, the word for 'saviors' is 'yasha', which is closely related to 'Yeshua', the name of the Messiah, which literally means 'salvation' in Hebrew.

יָשַׁע yâshaʻ, yaw-shah'; a primitive root; properly, to be open, wide or free, i.e. (by implication) to be safe; causatively, to free or succor:—× at all, avenging, defend, deliver(-er), help, preserve, rescue, be safe, bring (having) salvation, save(-iour), get victory.

Could it be, that the 'yasha' mentioned in Obadiah 1:21 are none other than the Saints, clothed in white linen, who return to Jerusalem with Yeshua/Jesus during the Second Coming?

Obadiah 21 seems to dovetail with Zechariah 14, when "the Lord my God will come, and all the holy ones with him" to fight against the nations who invade Israel and Jerusalem.

Zechariah describes a similar event, if not the same event, as a plague where "the Lord will strike all the nations that fought against Jerusalem:

Today, such a description could be nothing other than the effects of nuclear warfare, the very technology that Iran has been developing and brazenly threatening to destroy Israel, who they refer to as 'the Little Satan'.

The final verse of Obadiah 21 which reads when "the kingdom will be the Lord's" is suggestive of the messianic kingdom to come.

"The Lord will be king over the whole earth. On that day there will be one Lord, and his name the only name."
-Zechariah 14:9

In Revelation 2:27  Yeshua/Jesus says that He will give power to rule the nations to the faithful saints who overcome.

"And he who overcomes, and keeps My works until the end, to him I will give power over the nations—
‘He shall rule them with a rod of iron;
They shall be dashed to pieces like the potter’s vessels’—
as I also have received from My Father; and I will give him the morning star.”
-Revelation 2:27

"Beloved, we are now children of God, and what we will be has not yet been revealed.
We know that when Christ appears, we will be like Him, for we will see Him as He is."
-1 John 3:2

Some of the most detailed descriptions of the return of Messiah Yeshua/Jesus are found in the Book of Revelation:

Now I saw heaven opened, and behold, a white horse. And He who sat on him was called Faithful and True,
and in righteousness He judges and makes war.
-Revelation 19:11

And the armies in heaven, clothed in fine linen, white and clean, followed Him on white horses.
Now out of His mouth goes a sharp sword, that with it He should strike the nations.
And He Himself will rule them with a rod of iron.
-Revelation 19:14

"you have come to Mount Zion, to the city of the living God, the heavenly Jerusalem."
-Hebrews 12:22

"let us be thankful, and so worship God acceptably with reverence and awe, for our 'God is a consuming fire.'"
-Hebrews 12:28

Then the survivors from all the nations that have attacked Jerusalem will go up year after year to worship the King, the Lord Almighty, and to celebrate the Festival of Tabernacles.
-Zechariah 14:16

Thus Zechariah 14:16 describes the fulfillment of the last of the 'moedim', or 'appointed times', also known as 'Feasts of the Lord' as described in Leviticus 23:33.

In summary, Israel's enemies who are descendants of Esau will attack Israel before they are consumed like stubble by fire from God.  Then God will return to Zion with His saints, the 'saviors', to redeem Israel, establish His kingdom on Earth, and judge the enemies of Israel.