Southern Baptists Support Israel “For Such a Time as This!” 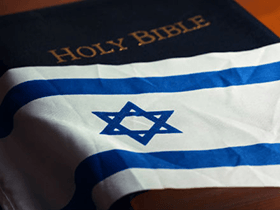 The Southern Baptist Convention (the largest evangelical denomination in America), just passed a resolution that boldly proclaims support for Israel. This is not highly unusual for the SBC that has a solid reputation for supporting Israel and the Jewish people. Yet, it comes at a time when other evangelical denominations such as PC USA have chosen to pledge allegiance to the Palestinian cause and are heavily promoting its narrative with whatever baggage comes with it (Christian Palestinianism, BDS, Campus Intifada to name a few.)

The SBC has a long history of biblical support of Israel coming from a rather conservative and mostly dispensational view of the land and its people. That biblical foundation can be found in the new resolution, especially in articles 1-4, 8 and 11 reading as follows:

• The Old Testament declares God’s promise to Abram, “I will make you into a great nation…. I will bless those who bless you, I will curse those who treat you with contempt, and all the peoples of the earth will be blessed through you” (Genesis 12:1–3)
• Israel represents the descendants of Jacob as an ethnic, cultural, and national entity (Genesis 32:28)
• The New Testament affirms that salvation is from the Jews and that God’s Word concerning Israel will be fulfilled (John 4:22; Romans 9–11)
• We are to pray for the peace of Jerusalem and for the salvation of Israel (Psalm 122:6–7; Romans 10:1)
• We thankfully remember that we are indebted to the Jewish people, who gave us much of our Bible and our Lord Jesus Christ, the Messiah.
• At this critical time when dangerous forces are mounting up against the nation of Israel, we recommit ourselves to pray for God’s peace to rule in Jerusalem and for the salvation of Israel, for the Gospel is “God’s power for salvation to everyone who believes, first to the Jew” (Romans 1:16).

This 2016 resolution (#5) is different because it is extremely bold. It clearly speaks out against the vile agenda of the new antisemitism. The biblical approach taken by SBC regarding Abraham, the Jewish people and Jerusalem has become somewhat of an expected position by the SBC–not that every single one of its sixteen million members adhere to it in one accord. But this wan't just a theological resolution, it was also a political move by SBC, as delineated in articles 5, 6 and 9. This is what makes it very unique:
• The Boycott, Divestment, and Sanctions (BDS) Movement seeks to isolate the nation of Israel economically and socially.
• We are concerned by anti-Israel activities in this country within certain university campuses, academic and professional associations, and popular culture.
• We support the right of Israel to exist as a sovereign state and reject any activities that attack that right by promoting economic, cultural, and academic boycotts against Israel.

SBC made a bold statement against the Boycott, Divestment and Sanctions Movement. To date, twenty three US states as well as some evangelical denominations have taken a stand against BDS. More and more people are seeing the destructive agenda of the Palestinian Authority through the BDS propaganda. They are also realizing that it is extremely biased at best and certainly seldom relying on factual truth if ever! I would have liked to see the SBC statement to read more like: "The Boycott, Divestment, and Sanctions (BDS) Movement seeks to unjustly isolate the nation of Israel economically and socially. But even without that clarification, their statement is already going further than many other denominations.

Continuing its political stand for Israel, the SBC resolution also denounced the [antisemitic] activities across many American university campuses. This is also known as Campus Intifada and is more present on the West coast in places like UC Davis, UC Berkeley and UC Irvine. It consists of pro-Palestinian groups gathering on US campuses where antisemitic speakers come to boldly accuse Israel. These are US university campuses you say…So what about Freedom of Speech? I would tend to agree, except that when pro-Israel groups or speakers attempt to speak or simply dialogue, they are harassed and abused with very little disciplinary action from university faculty or management.

It was very brave for the Southern Baptist Convention to put out such a resolution. The current evangelical trend is to not show support to Israel. Christian Zionists are turning into Christian Palestinianists as the biblical narrative is increasingly suffering from historical revisionism. This is why conferences like Christ at the Checkpoint are becoming more and more attractive to mainstream evangelicals including "once reputable" names such as Hank Hanegraaff.

This pendulum swing creates a grave danger for Israel and diaspora Jews at a time when they already suffer from a resurgence of violent antisemitism. Jewish people suffer at the hands of the liberal left, the extreme-right AND radical Islam. Biblical Christianity understood and applied properly should offer a "No-Strings-Attached" sanctuary to Jews worldwide. In light of current events and the rise of End-Times antisemitism, the SBC made a very unpopular move. In other words, they made a biblically correct move, knowing very well that it was politically incorrect. Jews and Southern Baptists might still disagree on who the Messiah is but this obviously doesn't negate the Southern Baptists' unconditional love for Israel, simply because the SBC answers to a higher authority and takes the Bible very seriously. They made the right move for such a time as this!