The Monuments Men: In Dire Need Of Them Today 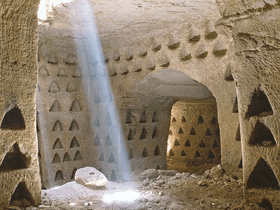 The Monuments Men: In Dire Need Of Them Today The Monuments Men presents a Hollywood look at the Monuments, Fine Arts, and Archives (MFAA) program which sprang from the need to protect European artwork during the Nazi invasion of World War II.  The MFAA was formed by the Allies in response to looting, burning, and destruction of priceless artworks, with the aim of preserving those cultural artifacts left in the wake of Hitler’s genocidal war.  Apart from being a hall-of-fame anti-Semite, Hitler was also a greedy little man, who wanted to own and control the entire art world.  But when the tides of war turned against him, he childishly had tens of thousands of masterpieces destroyed, as if to say, “If I can’t have them, nobody will.”

The Monuments Men movie pays homage to the art historians, architects, scholars, and intellectuals who took it upon themselves to restore stolen art to its rightful owners.  In doing so it addresses the issue of art vs human lives.  Is artwork worth dying for?  In the end, the answer is yes, as our cultural masterpieces stand as monuments to the great achievements of humanity.  To destroy a great painting, in other words, out of hatred for Jews, Poles, or Gypsies, is to commit cultural genocide.  So not only did Hitler wish to own all art which glorified his own ideals of perfection, but he wanted to purge the world of inferior cultures, including their very icons.

What the movie taps into is a moral high ground embodied by the 8th commandment:  “You shall not steal.”  Respect for other people’s property reveals God’s heart for blessing individuals with material possessions they need and might truly enjoy.  Hence, if a portrait painting by a great master such as Gustav Klimt is given as a gift by the artist to the subject, then the last person who has the right to claim ownership would be Adolph Hitler.  It all boils down to simple playground ethics.

But this impulse was not unique to Hitler.  It is well documented that, during the heat of the Protestant Reformation similar destruction took place.  In reaction to opulence and overindulgence on the part of the Popes who loved to amass extraordinary collections of art and relics, a harsh backlash against artistry, in general, took place among Protestants who saw artwork as idolatry.  This destruction of art – iconoclasm as it is known – was aimed at purifying the churches of the Reformation.  As a result, Protestant churches became empty, stripped-down affairs, to the point of minimalism.  Even crosses were removed, so as not to distract from the preaching of the Word.  This urge to throw off papal authority, and destroy artwork along with it, was so strong that even Martin Luther was put off by the destruction.

Fast forward to today. The Obama administration has drawn red lines in the Middle East, saying that if Bashar al-Assad, president of Syria, uses chemical weaponry, there will be “consequences.”  Then behold, video evidence surfaces on YouTube showing horrible clips of children being doused with water to try and ward off the deadly effects of chemical attacks.  Well, so much for the red line.  Now Assad must come clean and disclose his chemical weapons stockpiles.  Oh wait, not so fast – if only Assad would just admit to having chemical weapons, then there will be consequences.  That’s the new red line:  Admit you have them. Thus the tragedy rolls on, with no justice, no outrage, and just a shrug of the shoulders.  People will forget, they always do – that is the great hope of tyrants throughout all history.

But now there is a new game being played in Syria, and it’s all about cultural genocide.  Now that the US has backed down, now that the red line has been erased, now that the chemical attacks have taken their toll, the new mongrels have come into power and are taking bulldozers to ancient archaeological artifacts.  They are destroying anything that, to them, fails to reflect the ideals of radical Islam, and in the process, they are killing the intellectual life of Syria.

Consider:  There are hundreds of small archaeological sites throughout Syria, a land which lies in the heart of the Fertile Crescent just below the Tigris and Euphrates rivers.  Many of those sites stretch back to 6000 years ago.  The earliest remnants of human culture are buried in places like Syria.  The remains of the great port city of Ugarit are located in Syria.  The Aleppo Codex was housed for hundreds of years in Syria.  But now in the news, at this writing, you can find pictures of stupid men taking hammers to sculptures from Syrian antiquity.

Will the enlightened world really stand by and watch mass murder along with the destruction of priceless artifacts?  Where are the Monuments Men when we need them, on days like today?

Unfortunately, if you don’t stand up to people like these at the very beginning – when they start the killing – there is no reason to believe anyone will respond to them at the end when they finish the job and wipe out the culture they have conquered along with its people.

Next
Focusing on what Unites Jews and Evangelicals!