Is There Another Holocaust Coming? 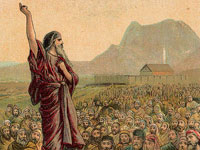 I am always extremely hesitant to use the term "Holocaust" to describe anything other than the events that took place in Nazi-occupied Europe in the 1940s. The gruesome horror of the Shoah (Hebrew word for the Holocaust meaning "the Catastrophe"), places it in a league of its own in the annals of human depravity and ethnic cleansing. This is of course not meant in any way to minimize any other genocide, but simply to recognize the unique place held by the Holocaust.

This catastrophe could be summarized as "the systematic attempt at the complete destruction of European Jewry" and even though the words "Shoah" and "Holocaust" have become somewhat taboo within most civilized circles, various components from the events that these two words describe remain a threat to my people worldwide.

The current Iranian regime has repeatedly stated that Israel deserves complete annihilation and that they would be "honored" to take part in such an event.

Hamas continually and indiscriminately shoots rockets from Gaza onto Israeli targets. Even though they result in very little damage to Israel in terms of the actual death toll, they do cause a tremendous psychological strain on the population. Commentary columnist Alana Goodman said it best when she wrote:" The truth is, Hamas's rockets don't cause as many casualties as they otherwise would because Israel goes to great lengths to protect its people. It spends fortunes on bomb shelters and missile defense systems. In contrast, Israel's military responses cause more Palestinian casualties than they otherwise would because Hamas goes to great lengths to endanger its people. It shoots missiles out of hospitals and schools, uses children as human shields, and tells Gaza civilians to ignore Israeli warning pamphlets that advise them to leave targeted neighborhoods".

I could continue (like I regularly do) to expose the Jew-haters of the world like Hezbollah, Al-Qaeda, various dictators and world leaders as well as many liberals, but as I have also done in the past, I cannot help but remember that God has promised to never, EVER completely destroy Israel! (Jeremiah 31:35-37). And that, if you ask me is the glorious future that I am hanging on to when it comes to my people.

But today, I am drawn to a passage of the Bible that is very disturbing and that very few, including myself, care to comment on. This is a passage found in Zechariah 13:8-9 and that has yet to be fulfilled:“And it will come about in all the land,” Declares the LORD, “That two parts in it will be cut off and perish; But the third will be left in it. “And I will bring the third part through the fire, Refine them as silver is refined, And test them as gold is tested. They will call on My name, And I will answer them; I will say, ‘They are My people,’ And they will say, ‘The LORD is my God.’”

This most troubling passage describes the land of Israel during the last days (a time of history that is drawing near). Anyone holding to a pre-tribulational and pre-millennial view of the end days (I would put myself in that category) would understand these two verses to contextually describe Israel towards the end of the 7-year Tribulation. At that time, two-thirds of all Jews–by then in the Land–will be decimated, leaving only one-third to be refined like silver and gold or in other words "saved".

Christians have often been accused of anti-Semitism simply because of the fact that they voiced their desire for Messiah's Second Coming to take place "now", which seems to imply that they are pushing for the destruction of two-thirds of all living Jews (about 10,000,000 by today's numbers). In reality, those accusing Christians need only to take it up with God.

So, what are we to do in light of such a burdensome passage of Scripture? We certainly cannot ignore it (too many have done exactly that). We could, through a series of theological gymnastics, change its meaning, but then we would have to live with the consequences. Maybe you can, but I am certainly not willing to do that.

Instead, we must accept that by the end of God's program, before the return of Yeshua, two-thirds of the Jewish people will perish. Yet, and that is a detail of extreme importance, God said two-thirds but never gave us an exact number. So, instead of dwelling on the fact that if it happened today it would decimate 10,000,000 Jews, let us work together on reducing that unknown total number of Jewish people that will populate the land of Israel during the Tribulation. Oh, and by the way, if you are unsure about the timing of the Rapture, the Great Tribulation and/or the Millennium, you are still faced with the same dilemma, except that you might live through it with the two-thirds of Israel instead of being caught up in the air prior.

Let us work together at reducing the number of Jewish people who do not know Yeshua thus reducing the final two-thirds of Zechariah 13:8-9.

Fighting anti-Semitism is crucial but it must be paired with sharing the hope we have in Yeshua. Additionally, if there is indeed another Holocaust on the horizon, it looks like we can all play a part in reducing its death toll, and that to me put us smack in the middle of God's will (Genesis 12:3).

In all their affliction He was afflicted, And the angel of His presence saved them; In His love and in His mercy He redeemed them, And He lifted them and carried them all the days of old.  Isaiah 63:9

Next
The New WMD against Israel: Worldwide Media Distortion!