Keep Calm and Carry On, It’s Just a French Pogrom! 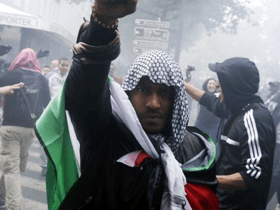 Last Sunday afternoon, if you were in Paris France, you most likely were watching the 2014 World Cup Finals, the Tour de France or simply relaxing during your three-day Week-end for France's Independence Day. Unless of course, you were marching towards the "Place de la Bastille" with the rest of the 10 to 20,000 pro-Palestinian demonstrators. But to be fair, this was not the first time that pro-Palestinian and Hamas supporters took the streets of the capital, and as scary as it always is, it happens regularly. This time it was to protest the on-going Gaza War, and of course, by proxy, all French Jews are responsible.

This last Sunday though was very different. For starters, it was the first time that such a huge crowd was gathered. 10,000-20,000 people will not go unnoticed on the streets of Paris, especially when they are heard shouting "Death to the Jews", "F*# the Jews", "Hitler was right", "We will burn you" or "Jihad, Jihad, Jihad". When some of the demonstrators called for prayer, several thousand started to shout Allahu Akbar, removing all doubt as to the ethnic/religious fabric of the angry mob. Freedom of speech and Freedom of religion are still in effect in France, but when such events take place, I question it all. The pro-Palestinian cause was really a cause worth fighting for, in the heart of some at least. Today it has simply morphed into an alibi for anti-Semitism.

Shop and restaurant owners stood still. Were they in shock or simply re-enacting the cowardliness displayed by the French during the 30s and 40s? It is probably a little bit of both, but I fear that the "virus of the by-stander" has once again infected France. What can one or two do against a crowd, right? This is exactly what went through the minds of the many watching behind their shutters when the Gestapo came to take my maternal grandfather in his home in Paris and shoved him into a cattle car to Auschwitz!

During these heinous demonstrations, Jewish people usually stay away from the area and/or stay inside their homes. So far it has proven to be the safest move from a very concerned Jewish community. But last Sunday was not the norm, and when a group of demonstrators started to walk towards the Rue de la Roquette Synagogue, everything took a turn for the worst.

There were between 150 and 200 people inside the synagogue for a special service to remember the three Israeli victims of the recent kidnappings/murders. All of a sudden the angry mob decided to throw café chairs (some of them lit on fire) at the building and continue to scream "Death to the Jews". The police were there but appeared overwhelmed. If it was not for the self-organized Jewish community security brigades, this could have quickly turned into a blood bath. Only three Jewish people were wounded as well as four members of the French police.

Last time the Jews were chased down and brought to their death was during the Nazi era, and the French Vichy government was very instrumental. The French police were pathetically unresponsive last Sunday, making me think of the days of the Russian pogroms.

My great-grandmother Rachel Schimkowitz escaped the pogroms and moved to France. Pogroms were government-sponsored riots against the Jews mostly in Russia from the mid-1800s to the early 1900s. They were responsible for the death of thousands of Jews as well as the departure of many more to America or Eretz Yisrael.
Last Sunday could very well be the first of the new pogroms in France. Be it by commission or by omission, the French police were implicated and responded very poorly. Not to mention the almost complete lack of coverage from the French media. Ah, the convenience of a World Cup Final! French President François Hollande and Prime Minister Manuel Valls both denounced the acts of violence, but to the French Jews who have been living in fear for quite a while, these were just words.

Today, Bastille Day is behind us, the Soccer frenzy has died off and the Tour de France is nowhere near Paris. So we need to ask ourselves the question: "What would have happened if the crowd had succeeded in entering the synagogue and reached the Jewish people inside?" Frankly, we all know the answer to that – there would have been a blood bath!

By God's grace, a pogrom was averted last Sunday. It is no longer sufficient for anti-Semites to denigrate the Jews with thoughts, words and even destructive acts against their property, now they want the people too. My people are caught in a tightening vise of Jew-hatred, between the growing extreme right of Le Pen and the virulent Muslim community.

The sad part to me is that the two sides of the vise are being tightened by the apathetic French by-standers. A bystander who does nothing only facilitates the work of a perpetrator. Sometimes your boldest move is made by your lack of action.

This was the first thwarted French pogrom and it was mostly a reaction from the angry mob. Can you imagine if they get more organized? Of course, you can and so can I. So I say get out and make aliyah to Yisrael. At least there you will be protected!