Not Exactly “A Pope for All Seasons!” 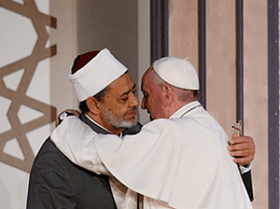 In the story "A Man for All Seasons" based on the life of Sir Thomas More, the hero is portrayed as a man of principle envied by many of his contemporaries, including some of his rivals. Sir Thomas More was once described in those words:" "More is a man of an angel's wit and singular learning. I know not his fellow. For where is the man of that gentleness, lowliness, and affability? And, as time requireth, a man of marvelous mirth and pastimes, and sometime of as sad gravity. A man for all seasons."

Many around the world today see the current Pope as a man for all seasons, but are they right in their assessments and how does it all line-up with Scripture?

The Pope just co-signed a document with Al Azhar Grand Imam Sheikh Ahmed al-Tayeb (once named "the most influential Muslim in the world"), titled "Document on Human Fraternity for World Peace and Living Together". Ecumenically speaking, the document is a dream come true for mankind, and many have described it as a "historical breakthrough". I would venture to say that it might be a "biblical breakthrough," but not necessarily for the same reasons.

The document says of God "He is the Creator who has formed us with His divine wisdom and has granted us the gift of life to protect it. It is a gift that no one has the right to take away, threaten or manipulate to suit oneself. Indeed, everyone must safeguard this gift of life from its beginning up to its natural end. We, therefore, condemn all those practices that are a threat to life such as genocide, acts of terrorism, forced displacement, human trafficking, abortion, and euthanasia."

The Pope might be thinking that because God created all men equally (a biblical view that I share with him), Grand Imam Sheikh Ahmed al-Tayeb shares his views, but just because the Grand Imam signed the document doesn't mean that he will uphold it.

Further down, the document speaks of freedom of religion: "Freedom is a right of every person: each individual enjoys the freedom of belief, thought, expression and action. The pluralism and the diversity of religions, color, sex, race, and language are willed by God in His wisdom, through which He created human beings. This divine wisdom is the source from which the right to freedom of belief and the freedom to be different derives. Therefore, the fact that people are forced to adhere to a certain religion or culture must be rejected, as too the imposition of a cultural way of life that others do not accept."

Here we see that the Pope is taking a pluralistic position demanding that all men respect one another regardless of their beliefs since "The pluralism and the diversity of religions, color, sex, race, and language are willed by God in His wisdom, through which He created human beings. The proverbial roads that all lead to Rome are no longer sufficient, now they all need to also lead to God. The same god for Roman Catholics and Muslims, that is!

As a matter of fact, Grand Imam Sheikh Ahmed al-Tayeb is on record for taking a position that is in direct opposition of the document he co-signed. He recently said "Those learned in Islam [al-fuqaha] and the imams of the four schools of jurisprudence consider apostasy a crime and agree that the apostate must either renounce his apostasy or else be killed. Additionally, in a 2013 interview on Egyptian TV, he said that Muslims "suffer from global Zionism and Judaism" and "You shall find the strongest among men in enmity to the believers to be the Jews and the polytheists." Statements like that would disqualify him from even being considered as a signatory on the "Document on Human Fraternity and World Peace."

Furthermore, he even refused to say that the Islamic State (ISIS) were not true Muslims, but in this case, I agree with him. I am under the conviction that if a Muslim were to take the words of the Qur'an literally, they would have no choice but to kill infidels and apostates…Jews and Christians alike. The vast majority of Muslims are nominal Muslims who are not necessarily well versed in the Qur'an and as a result, they "cherry pick" verses that they wish to apply. This can be said of all religions indiscriminately.

So, how can I possibly say that this might be a biblical breakthrough? Because from the standpoint of the upcoming eschatological one-world order, this is 100% in line with biblical prophecies. The one-world government is becoming more of a reality each day, and it will undoubtedly include a one-world religion (Revelation 13:11-18.)

The Pope might be blinded by wishful thinking and a pluralistic, postmodern view of religion. The immediate future looks like global dhimmitude to Islam, but the end of the age will be more tragic for many. It will only bring two options: We either worship the prince of this world and end up with him in the Lake of Fire (Revelation 20:10), or we worship the God of Abraham, Isaac and Jacob through Yeshua the Messiah, and we spend eternity in His presence. Even the Pope isn't exempt from making that ultimate choice. He is also responsible for leading billions to the true God. Maybe it's time for the Pope to reset his GPS (God Positioning Satellite)!

Next
The Pervasiveness of BDS in American Politics!