Messiah Yeshua and Hanukkah are Connected! 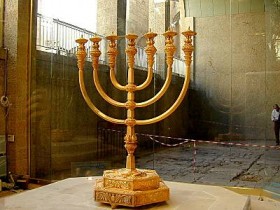 The holiday of Hanukkah, also known as The Feast of Dedication or Feast of the Maccabees begins tonight at sundown.

This holiday is a man-made holiday, not a feast day ordained by God, so it is not mentioned in the Jewish bible; the Torah, the Haftorah or Tanakh, but is celebrated by Jews around the world.  Hanukkah is a sequence of 8 days set aside to praise and thank God for his faithfulness and miraculous power.  The celebration is remembering a victory of the Jews over the Greko/Syrians in 165 B.C.  by the retaking and re-dedication of the Jewish Temple in Jerusalem.  The highlight of Hanukkah is known as the Miracle of Lights which involves the large 7-branch menorah in the temple.  The menorah, or eternal lamp (Ner Tamid)  was re-lit by the priests to let the people know that the temple had been reconsecrated.  There was only enough oil to keep the menorah lit for 1 day and it would have taken 8 days to prepare new oil.  A decision was made to light the menorah anyhow.  The miracle is that the menorah continued to stay lit for 8 days on 1 day's worth of oil.

Hanukkah in the New Testament

And it was at Jerusalem the feast of the dedication, and it was winter.

And Yeshua walked in the temple in Solomon's porch.

Then came the Jews round about him, and said unto him, How long dost thou make us to doubt? If thou be the Messiah, tell us plainly.

Yeshua answered them, I told you, and ye believed not: the works that I do in my Father's name, they bear witness of me.

But ye believe not, because ye are not of my sheep, as I said unto you.

My sheep hear my voice, and I know them, and they follow me:

And I give unto them eternal life, and they shall never perish, neither shall any man pluck them out of my hand.

My Father, which gave them me, is greater than all; and no man is able to pluck them out of my Father's hand.

I and my Father are one.

What is most interesting is at that time the second Jewish Temple built by the proclamation of  Cyrus the Great of Persia was the standing temple, yet during the feast of dedication Yeshua was walking among the remains of the 1st Jewish Temple built by Solomon which is the actual temple that was retaken and reconsecrated by the Jews from the Greeks.

The first Jewish menorah was the one with 7 branches that was lit by Kohanim (priests) at the Holy Temple.  It is the symbol of the Jewish people and the State of Israel.  The 9 branch menorah, called in Hebrew 'Chanukiyyah', is used only during the holiday Hanukkah.  The tallest candle on the menorah is called the 'Shamas' or 'Serving' candle.  Yeshua Messiah came not to be served, but to serve.  In John 8:12 Yeshua also said, "I AM the Light of the World"

Rabbi Scott Sekulow of Beth Adonai has some more fascinating things to share about the connection between Yeshua and Hanukkah in the following video:


And here is a worship song about the Light of the World:

Next
How Close Are We *Really*?