On Palm Sunday, Yeshua Revealed Himself as Messiah 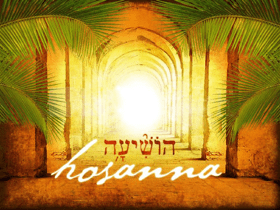 Today is Palm Sunday, which marks the precise day that Yeshua was prophesied to reveal himself as Israel's Messiah by riding into Jerusalem on a young donkey.
The crowds recognized their Messiah, shouting "Hosanna!  Blessed is he who comes in the name of the Lord!"  as they waved palm branches before laying them on the ground in front of their king.

Blessed is he who comes in the name of the LORD.  From the house of the LORD we bless you.
Psalm 118:26

The precise timing of Yeshua's crucifixion was given to God's Chosen People, the Jews, when God revealed to the prophet Daniel (9:24) how the Jews could calculate the precise day of the revealing of the Messiah. Talking of a 490 year period, the prophet foresaw that it would begin “from the going forth of the commandment to restore and build Jerusalem” (9:25). In the book of Nehemiah, we learn that this command was given "in the month Nisan [on the Hebrew calendar], in the twentieth year of the king" (2:1). The king was Artaxerxes Longimanus who ruled from 465 to 425 B.C. The prophet Daniel said that 483 years from that date, the Messiah would be revealed to Israel, but He would then "be cut off, but not for himself" (9:26). This prophecy refers to the crucifixion when Yeshua died, or was cut off, for the sins of the world.

483 years later, to the day, was Sunday, April 6, 32 A.D. On that day, which we commemorate as Palm Sunday, Yeshua rode into Jerusalem on a donkey and revealed Himself as Israel's Messiah. He was killed four days later, thus fulfilling the prophecy that He would be revealed and then cut off or killed.

Hosanna, you are the God who saves us, worthy of all our praises.

Since the Jewish genealogical records were destroyed in 70 A.D., along with the destruction of Jerusalem and the Temple, it would not be possible for anyone else to claim to be the Messiah and prove that their lineage traced back to King David.

The scriptures foretold that the Messiah would come while the Temple in Jerusalem was still standing.

Next
Truth, Half-Truths and Lies: “Christ at the Checkpoint” anti-Israel Conference