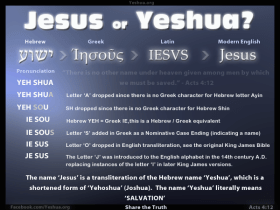 Where does the name ‘Yeshua’ come from?

Don’t most people call him ‘Jesus’? The name Yeshua is a shortened version of the name Yehoshua or Joshua and is the literal Hebrew word for Salvation.  Around the time of Jesus’ birth, the names ‘Yeshu’ and ‘Yeshua’ were not uncommon. Reading right to left, the Hebrew letters which spell Yeshua are Yod, Shin, Vav, Ayin. According to scholarship, Aramaic was used in everyday language, but Hebrew remained the holy language and was used in daily prayer and worship.  The two languages were similar to each other as Italian is to Spanish, and both used the same alphabet.  The name Yeshua transliterated into Aramaic became Yeshu, dropping the final “a” and pronouncing it “Yeh-shoo.” The name ‘Jesus’ did not exist at this time, as it was later derived as a transliteration from the Greek IESOUS.  In fact, the letter ‘J’ was not added to the English alphabet until the 14th century. Note that around 1600 A.D. Protestant Bible translators started to transcribe עושי in the Old Testament into English as "Jeshua", but kept transcribing Ιησους in the New Testament into English as "Jesus", obscuring the connection between the equivalent Greek and Hebrew versions of the same name. The name Jesus is a transliteration of the Greek name Iesous which is a transliteration of the name Yeshua.  Translation and transliteration are not the same things.  Translation involves the conversion of a word in one language to a word in another language with equivalent meaning. For example, the English word ‘Cross’ translates into the Latin word ‘Crux’ from which the word ‘Crucified’ is derived. Transliteration involves finding the equivalent letters used in a word from the alphabet of one language into the alphabet of another language. An example is the Greek word βιβλίον is the noun for a paper book or scroll and is transliterated into English as Biblion from which we have derived the word ‘Bible’. All occurrences of Yeshua as a name in the Hebrew Bible or Tanakh are in I Chron. 24:11, II Chron. 31:15, Ezra 2:1, and Nehemiah 7:7 where it is transliterated into English as Jeshua.

There are even more instances of the word Yeshua being used which are translated as ‘salvation’. In the Brit Hadasha, or New Testament, the first instance of the name of the Messiah is found in the first chapter of the Gospel of Luke: In Luke 1:26-39 the angel Gabriel was sent by God to Nazareth to bring news to a virgin named Mary. “Greetings, you who are highly favored! The Lord is with you.” Mary was greatly troubled at his words and wondered what kind of greeting this might be.  But the angel said to her, “Do not be afraid, Mary; you have found favor with God.  You will conceive and give birth to a son, and you are to call him Jesus.  He will be great and will be called the Son of the Most High. The Lord God will give him the throne of his father David,  and he will reign over Jacob’s descendants forever; his kingdom will never end.” In Matthew 21 we read, “Joseph, son of David, do not be afraid to take to you Mary your wife, for that which is conceived in her is of the Holy Spirit.  And she will bring forth a Son, and you shall call His name Jesus, for He will save His people from their sins.” (NKJV) “She will give birth to a son, and you are to name him Yeshua…because he will save His people from their sins.”  (Jewish New Testament)

Jesus is a Jew

Jesus/Yeshua is a direct descendant of King David through both his mother’s lineage and his adoptive father Joseph’s lineage.  When Jesus read from the scroll of Isaiah in the synagogue he read in Hebrew, not Greek or Aramaic.  So we know that he was ‘schooled’ in Hebrew, which is almost absurd because we’re talking about God in the flesh, the Living Word, who is the Creator of all things including language.

The Bible doesn't give instruction to favor one language or translation over another. We are not commanded to call upon the name of the Lord in Hebrew only. Acts 2:21 says, "But everyone who calls on the name of the Lord will be saved." God knows who calls upon His name, whether they do so in English, Portuguese, Spanish, Hebrew or any other language. He is still the same Lord and Savior. Below is a list of how the name Jesus is pronounced in other languages:

In calling Him Yeshua we are restoring to Him His Jewish identity. Yeshua was and is the name He was called when He walked on this Earth. Greek masculine names have a nominative “s” ending.  Therefore, the final Greek form became Iesous which in return became the Latin IESVS which was finally translated into English as Jesus.  So what we end up within “English” is a fifth-hand transliteration of the original name Yeshua. Regardless of which name is used, Yeshua (Jesus) hears the prayers of those who pray from their heart and who truly seek Him, He is the same yesterday, today and forever and just like his Father, He has several names and titles. Other names and titles by which Yeshua is known are:

Next
The Vital Legacy of ‘Righteous Gentiles’