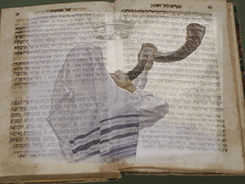 The Biblical name for this holiday is called Yom Teruah (In Hebrew, literally "day of shouting/raising a noise") or the Feast of Trumpets.

On High Holy Days the Jews read from an orthodox machzor or Prayer Book.

There is a very interesting prayer that mentions the name of a high priest, or kohen gadol, which appears in various older machzors, going back over 100 years…His name is Yeshua.

The title of this prayer is "Sar HaPanim" which is Hebrew for "Prince of the Face" and is recited during Rosh Hashanah between the blowing of the shofar.

The prayer names the kohen gadol as Yeshua who is the One who atones for our sins.

The prayer is as follows:

“May it be Your will that the sounding of the shofar, which we have done, will be embroidered in the veil by the appointed angel, as You accepted it by Elijah, of blessed memory and by Yeshua, the Prince of the Face (Face of Hashem) (Prince of God’s Presence) and the one who sits on God’s throne. May You be filled with compassion toward us. Deserving of praise are You, LORD of compassion.”

Another translation read as follows:

"May it be your will (before you) that the sounding of the TASRHAT that we blow be woven into the curtain by the hand of the minister, Tartiel, like the name that was received by the hand of Eliyahu (his memory be for a blessing), and Yeshua the Prince of the Face, and the Prince Metatron. And may you be filled with mercy for us. Blessed are you, Master of mercies."

It is mentioned that the prayer probably was taken from Isaiah 63:9 which mentions an individual with the title "Sar HaPanim" meaning "Prince of the Face" or "The Angel of His Presence" translated from the Hebrew "Sar Ha Panim".

In an interview Rabbi Simcha Pearlmutter revealed that this prayer which is also known as ‘Machzor Rabah’ taken from an Orthodox Jewish prayer book recited during Rosh Hashanah  between the blowing of the shofar — names Yeshua as The One who atones for our sins. The title of the prayer is "Sar HaPanim" meaning Prince of the Face.

In 1967, Simcha Pearlmutter, a Jew from Miami, Florida, led a group of American Jews in founding a kibbutz called Ir Ovot south of the Dead Sea and southeast of Dimona in the Arabah valley.

Rabbi Simcha Pearlmutter, though not 'smicha' or ordained, was an orthodox Jewish rabbi who did attend yeshiva for a number of years after coming to know Yeshua as the Mashiach on his own, without being evangelized by Christians, or even reading the New Testament.

He set out to disprove Yeshua, only to find Yeshua was pursuing him, and this through his studies in the Torah, and in Jewish literature, and more importantly in the siddurim and machzorim – the prayers composed by our Sages speaking of Yeshua. He came to believe, as he reports also that other rabbis who visited him in his 25 years in the desert of Israel also believe: that Yeshua is the Mashaich, the Mashiach HaShem.

On Apr. 13, 1994 at 9:40 am Simcha Pearlmutter lost his only son, Sgt. Ari Pearlmutter of the IDF, aged 19, in a Hamas terrorist bus bombing in Hadera central bus station.  Ari was one of six killed, 30 were injured.  The attack took place on the Israeli Fallen Soldiers and Victims of Terrorism Remembrance Day.

Go to a Jewish bookstore today and look in contemporary Rosh HaShanah machzor and you'll very likely see that the name Yeshua is gone from the prayer.

Apparently it has been deleted from a traditional Jewish siddur after having been included for many centuries without anyone having a problem with it.

From an interview with Rabbi Simcha Perlmutter:

"So the last prayer says that we call upon the name of Yeshua that it may atone for all our sins.  Now I want you to understand very clearly that I did not write this prayer, and I did not publish this book, and I did not write this book. This book was written by Rabbis long ago, and this prayer cannot be taken out of this prayer book, not by me, and not by any other Rabbi. Even if a Rabbi desired to extract it, he could not—not if he is an orthodox and observant Rabbi who goes by rabbinical halachah, because he is bound by what we call the word and the prayers of Chazal. “Chazal” means, Chachameinu zichronam livracha, “Our wise men of blessed memory.” And what Chazal has put in, we are of insufficient authority to remove."

May Messiah Yeshua be revealed to Israel and all the earth without delay so that every knee will bow and every tongue will confess that Jesus is Lord. 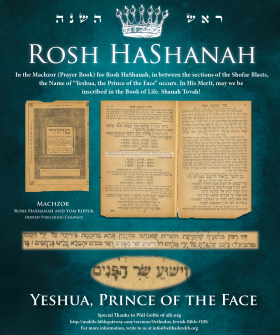