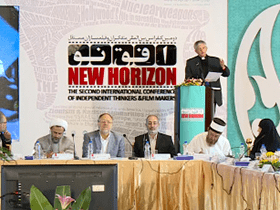 The Rev. Dr. Stephen Sizer, no stranger to controversy, has appeared at the Second International New Horizon Conference in Tehran, Iran.  His appearance has sparked a public outcry from the Anti-Defamation League and other Jewish watchdog groups now calling for his removal from the Church of England.

Sizer’s attendance at the conference comes on the heels of church disciplinary action taken against him in response to complaints lodged in 2012.  Sizer was accused of spreading anti-Semitism and of conduct inappropriate for the office of the clergy.  The matter was initially settled in mediation with Sizer expressing regret for his words, and agreeing to submit his website and blog postings to continual review.

But new allegations have surfaced, with some calling for immediate action on the part of the Church of England.

Messianic Jewish theologian Dr. Michael Brown, who has debated Sizer publicly over the issue of Jewish and Christian Zionism said in response, “Rev. Sizer has brought great reproach to the name of Jesus and to the cause of the gospel, and I consider him to be a real enemy of the people of Israel. He has even claimed that Messianic Jewish congregations and Christian churches in Israel that ‘side with Zionism’ have ‘repudiated Jesus . . . repudiated the Bible . . . and they are an abomination.’”

When asked if Sizer should step down, Brown was unequivocal. “Certainly, Rev. Sizer is free to hold his opinions, but not as a vicar of the Church of England, and his consistent siding with virulent anti-Semites tells us all we need to know.”

The International New Horizon Conference is an annual gathering of political activists who claim to be seeking to uncover the secrets of the Zionist movement. It has been described as a meeting of conspiracy theorists, holocaust deniers, and anti-Semites, with the Anti-Defamation League calling it both “Anti-America and Anti-Israel.” Among the attendees this year were comedian Dieudonne M’bala M’bala, the originator of the reverse Nazi salute known as the ‘quenelle,’ and Madea Benjamin, co-founder of Code Pink. Discussion topics included such themes as, “9/11 and the Holocaust as pro-Zionist Public Myths.”

Sizer’s own presentation was entitled, “Christian Jihad vs. Christian Zionism.”  He has responded to the allegations saying, “I was seeking to build bridges within a faith context to help to improve relationships for minorities and between our countries.  Those who criticize this kind of conference must think very carefully of the consequences of their words for Jews and Christians in countries like Iran.”

Sizer and others are quick to draw a distinction between anti-Semitism and opposition to political Zionism.

Until transcripts or video of the conference come to light, it remains to be seen what will unfold.  Nevertheless, many in the Jewish community are calling for the immediate resignation of Rev. Sizer.