Do Jews Have a Future in France Under Emmanuel Macron? 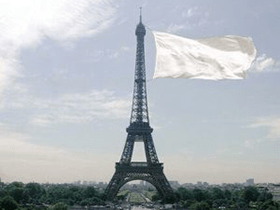 On May 7, 2017, France elected "Centrist" Emmanuel Macron as their new president for the next five years. He was running against Marine Le Pen of the Front National Alt-Right party and won with 65% of the votes.  But it was two weeks ago that France truly turned a page when they brought Macron and Le Pen to the second round, thus eliminating the age old Right/Left dichotomy that the country had been used to for decades. Now what?

Mr. Macron will be sworn in exactly one week after his victory and will scramble to form a government, pulling from both sides of the establishment that his victory so boldly pushed aside. Within the next month, French people will go back to the voting booths for the "Legislative" elections. They will elect the 577 members of of the 15th National Assembly of the French Fifth Republic. The next five years of Mr. Macron's governing are hinging around the outcome of the June elections. Compromise is in the air, but how much compromise?

Emmanuel Macron re-labelled himself as a centrist, and started his new party. But all remember that he served as a Socialist minister for two years under the Hollande government. Has he truly moved towards the center of the French political spectrum? I don't think it really matters except maybe to attract supporters from both sides in the next elections. What is more important in the writing of France's future is how much of a globalist he is. He is a strong promoter of multiculturalism, and we know how well that has worked in the last few years. Ask the people of Germany or Sweden for example!

Paris' largest mosque " La Grande Mosquée de Paris" released a statement saying "It is a clear sign of hope to French Muslims that they can live in harmony and respect of French values" . Macron's victory is good news for the 6 to 7 million Muslims of France. And that is what they are, "Muslims of France" NOT "French Muslims", simply because the vast majority of them do not integrate. So much for multiculturalism! Mr. Macron is not a promoter of radical Islam, and of course not all Muslims espouse the Islamist ideology of death. Far from that! Yet, many of the Muslims living in France are not interested in "harmony and respect of French values."

Under Macron, we can expect political correctness to become the rule of law, especially as it pertains to radical Islam. We will probably soon see an influx of new migrants come to the "New France." How will that affect the 500,000 French Jews, who have already started to immigrate to Israel in large numbers over the last five years? In the near future, it would appear that the Jews of France wouldn't be at risk. After all, over 93% of French Israeli voted for him. But is it possible that they really voted against Le Pen instead?

Jewish people have a long history of being caught between a rock and a hard place. For example, before the Maccabbean Revolt (167-160 B.C. E), Jewish people were the buffer zone between the Ptolemies (Egypt) and the Seleucids (Syria), and they suffered as a result. The Jews have been the "scapegoats" of humanity for centuries. Equally persecuted for being communists or capitalists, Jewish people are too often caught in the middle. A Le Pen victory would have been disastrous for French Jews along with Arabs, blacks and any other ethnic minority in that country, so the obvious was to elect Mr. Macron, at least for now.

Macron's multiculturalism and globalism will do very little to stop Europe's Islamist invasion. As much as Le Pen's agenda was extreme in many ways, she did have the intention of controlling immigration. Macron might just open France's borders further and allow for thousands of unchecked migrants. Once again, the French Jewish community is at risk, even if the vast majority voted for Macron. It appears that they were more interested in putting a bandage on France's wounds instead of amputating the infected limb. Time will tell, but what do you really expect from a French president who claims "there is no such thing as French culture?"

Under Le Pen, French Jews would have started to make Aliyah immediately. Under Macron, they might have a little more time. But France just surrendered to multiculturalism on May 7, 2017. It is up to Emmanuel Macron to fight the good fight. It isn't even clear if he has identified it or even agreed there is a fight at all. The future is unstable for French Jews, but if Mr. Macron doesn't turn France around, the future will be very uncertain for all of France.  As a result, Marine Le Pen who garnered 35% of the French votes in 2017 could be a shoe-in in 2022 and then, whatever is left of the French Jewish community will have very little time to leave.