France’s 2nd Chance to Lead the War against Apocalyptic Islam! 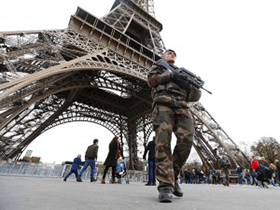 On Friday November 13, 2015, France was hit by yet another series of terrorist attacks in Paris, claiming the lives of 129 innocent people in several locations practically simultaneously. I had just returned from my biannual ministry trip to France four days prior, on the 9th of November. On the 7th, my wife and I attended a concert in Paris in a place as frequented and as famous as the Bataclan. Almost everyday of our stay we ate meals at restaurants and bistros near the attacked venues. The victims were the 129, but it could have easily been us or it could have easily been you!

It was only nine months ago that the whole world joined France in the mourning of the 17 Charlie Hebdo/Hyper Cacher victims. Hashtags like #jesuischarlie and #jesuisjuif abounded. Flowers and candle memorials kept growing on Paris sidewalks and of course there was the 4 million people march on January 11. France had woken up to the sad reality that apocalyptic Islam had hit them hard. Freedom of Speech at Charlie Hebdo was hit hard, but also Freedom of Religion at Hyper Cacher. Days later, Prime minister Manuel Vals delivered a very poignant speech to the French National Assembly in defense of the Jewish community and vowing to go to war against terrorism. I was hopeful that things would change but I didn't hold my breath. The world continued to placate the comforting hashtags on all social networks. It was the warm and fuzzy appropriate thing to do. It was a time when the planet was united with France and its Jewish community. Well, virtually united I should add, but you don't fight a war with hashtags and candle vigils. Unfortunately,  the world's attention span is only as long as the next Super Bowl, Hollywood hit or iPhone iteration. And so, we went our merry way, quickly forgetting France and its crisis with terrorism.

But what about France itself? What was really accomplished in the aftermath of the January attacks? Not much I fear. Sure, there were some foiled attacks here and there, some arrests and even search warrants. But soon after the emotional and seemingly determined speeches, politics returned and it was business as usual. The different political parties would rather be blinded by petty disagreements than catch a common vision on how to fight the real enemy. By real enemy, I am not speaking of global warming here but the global WARNING of apocalyptic Islam. Don't misunderstand me for saying that France doesn't care about the attacks. I think the French people care very much and to an extent even the government does too. But there is a strange behavior resulting from a hydrid of denial, fear and political correctness. And so it goes with France…another day, another euro!

It was obvious to all that another attack would take place. That it would be so soon and so intense wasn't expected. The use of explosive belts brought terrorism on French soil to an all new level. And of course, for once it would appear as if the targets weren't Jews. This is in no way any relief, but simply an observation. I just want to point out that flexing under Islamic threats, Palestinian social justice demands and/or BDS rulings will not stop the enemy. According to Winston Churchill, appeasement is akin to feeding a crocodile hoping it will eat you last. Well, France, on November 13 the crocodile just bit off your hand! Now what?

France was devastated last January and had a chance to take action with the kind of authority and leadership that would have led the free world into an all out war against apocalyptic Islam. That ship has sailed! But now it returns as an armada and with a vengeance, because the Islamic State hates France and all that it represents. It probably goes back to the early 1800s and the Universal Declaration of Human Rights after the French Revolution of 1789.  Looking back nine months, France was mostly all bark and no bite after the January attacks. Today it has a second opportunity to stop evil. This isn't going to be an overnight feat but rather a concerted international effort that could take 20 years. France could actually lead the way if they put their euros where their mouth is!

On the Monday following the carnage, French President François Hollande spoke in front of the Congress in a room in Versailles that hadn't been used since 1955. It was indeed historic, but it remains to be seen if the outcome will be positive or negative. Mr. Hollande opened his speech by declaring:" France is at war!" He had the Congress' attention and he had mine as well. Contrary to Mr. Obama who one day before the attack said that the Islamic State was contained. Soon after, Mr. Obama declared that what happened in Paris was a set-back. A set-back to what, the Middle Ages? Mr. Hollande on the other hand, affirmed that ISIS had to be destroyed. Not slowed down, not stopped, not talked to…but destroyed! I couldn't agree more. He was speaking one day after having sent fighter jets to bomb strategic ISIS location in Syria. Good for you Mr. Hollande. Please keep on, don't stop now. They must be eradicated.

In the meantime, may I suggest that you close your borders or at the very least strictly enforce border control. Forget about the accusation of profiling, we are way past that. May I also suggest that you seriously limit the intake of migrants into France (and all of Europe for that matter)? It is now proven that one of the Paris terrorists came to France through the Greek island of Lesbos invisible and untraceable in a wave of refugees. This open-door policy spearheaded by Germany's Chancellor Angela Merkel is now showing us how easy it is for ISIS to infiltrate Europe. And finally, please close all the mosques that are instrumental in the radicalization of other Muslims. Incidentally, there are between 5,000 and 6,000 imams in France alone and only 1–the Imam of Drancy– came out to denounce the terrorist attacks of November 13. Muslims of the world, if you want us to make a distinction between moderate Islam and radical Islam, then please speak up against the terror attacks of November 13–not to mention many others worldwide– otherwise your silence will speak for you.

France is at a critical crossroads for the second time in one year. How many more terrorist attacks by ISIS will it take, in France or anywhere else, for us to take them seriously? Protect synagogues and Jewish schools and they attack a stadium, restaurants and a concert hall. Protect these venues and they will attack a movie theater, a mall or amusement park…and the list goes on! Too many innocent lives are destroyed by people who glorify death. My ultimate prayer is that they would truly have a change of heart and meet the true God of the universe, the God of Abraham, Isaac and Jacob through His Messiah Yeshua. It is a difficult prayer to pray but we must not stop praying. Prayer can change them, but if they do not change they must be stopped. This is France's second chance to fight the war against Islamic terrorism and it might very well be Europe's last chance!

Next
Islam vs NASA