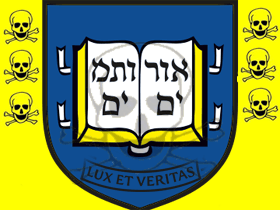 It’s no secret that theology proper – the formal study of God – is an unwelcomed pursuit in the hallowed halls of today’s upper academia.  We have lived in a science-driven world since the Enlightenment of the 18th century, and as any self-respecting rationalist can tell you, religion is not a suitable topic for investigation, dissertation, or the laboratory.  No, indeed. We have moved beyond God, and if the truth be told, the larger public sphere itself is no place for superstition.  In light of this, the removal of the faithful (read: the duped) to their tiny Bible colleges outside of mainstream academics is a good thing entirely.  Now, if only we could get these small-minded, anti-intellectual, gun-toting plebes, to unclench their death grips from their Bibles, then we’d really be on to something.

See you must understand.  Biblical Studies, as a discipline, does have its place, and that is within the museum, along with so many other artifacts from the dim and distant past.  These relics sit inside glass cases to remind us how primitive mankind used to be before we killed God and got beyond all that messy tribalism, and the warlike mentality of those who cannot see past their religious dogma.  And so, thankfully, the Bible does retain a tiny place in the Ivy League.  As a matter of fact, if you have some time to waste and money to burn while you are in college, you may even take a course of study from highly credentialed experts, such as Christine Hayes, who, in a basic Bible overview course taught at the distinguished Yale University, begins with several rock-solid faith-canceling premises.  Among these fundamental and dogmatic assertions are 1) that the Bible is not, I repeat not, a unified literary work, and 2) that it contains absolutely zero theology to boot.

Well, who knew?!?  Don’t you wish you had studied Bible at Yale now?

These two notions, that the Bible is un-unified and contains no theology, are patently insulting to every great and small theologian of the last two thousand years, not to mention every schooled pulpit minister, along with every thoughtful layperson who ever picked up a Bible since the invention of the printing press and the execution of William Tyndale for translating it into English.  One cannot help but wonder what Jonathan Edwards, arguably the greatest philosophical theologian in history, and himself a Yale graduate, might say.

“Hey Johnny!” we might smilingly inform him before he sharpens his quill to jot down notes for his next sermon.  “We want you to know the Bible has no theology in it.  That’s right, none whatsoever.  It is merely an epic tale of the Israelites – who we only begrudgingly admit existed –with no internal unity, and it was never meant to be used for theological study.  So sorry about that ol’ chum.  We know you were really into that sort of thing.  Why not take up the banjo instead?”

Do the students who travel the halls of Yale Divinity School, making great use of the Jonathan Edwards Center, harbor any inkling of betrayal at the thought that the Bible, the greatest literature in the history of mankind, teaches nothing concrete at all about God himself?  How high those tuition rates must seem at times like these!

But fear not. There is still hope, even for those brilliant professors who have toiled so laboriously over their papers, hunched over, night after night, doggedly churning out those elite pages of research which only their colleagues and indulgent family members may understand and fully appreciate.  Have no fear, because there are still answers to such vexing questions as these, and fortunately the salt of the earth has access to them, thanks to those same small-minded religious dogmatists, who cling to their Bibles, their guns, their banjos.

In short, what unifies the books of the Scripture into a coherent whole, is theology itself.  God is the unifying literary factor of the Bible and nothing else.  Understand that theology comes from a defense of what we learn about God from the Bible.  Theology is forced out of the friction between those who believe the message of Scripture, and those who would twist and deny it.  And so, far from worrying about what a great mind like Edwards might think about the way God is put to death at Yale, perhaps it’s better to concern ourselves with what the Almighty Himself might think about the way we have dismissed Him.

But I know, that’s insane.  Way too simple.  Take your religion out of here!  Out!  Back to the lower swamps of the people’s churches, where darkness reigns, and a clergyman’s views are worth less than fool’s gold.  Keep your Bible, and your banjo.