I will set no wicked thing before mine eyes 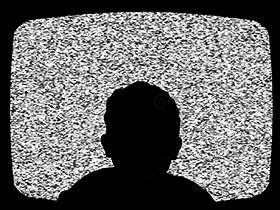 Anyone who has grown up around a common TV screen knows, at least in theory, that there are rivers of garbage you can filter into your head around the clock.  You can, literally, place yourself in front of flickering broadcast images and sounds that degrade your humanity, and atrophy your IQ at the same time.  (What a novelty!)  But having grown up in an era when there were only three major TV networks, having witnessed the .com revolution, and now seeing the explosion of personal media on a massive scale, I can’t help but conclude that too much of a good thing quickly becomes a very bad thing.

In our house, we try to manage the media.  We don’t let the kids turn to jello in front of the screen – at least not too often!  We don’t stay up into the wee hours of the night checking Facebook.  (Although that is a temptation.)  And we most certainly do not subscribe to a full cable package of 1000-channels-but-nothing-good-is-on.  When reality TV came out we turned it off real quick, knowing that we had our own realities to live.

But we’re not total Luddites.  We have a Roku stick which gives us some great documentaries, along with a number of surprisingly high-quality crowd-sourced independent movies, plus some mainstream shows from outlets like the BBC that are up to standard.  It also helps us save a ton of money, as I understand a cable bill can be upwards of $200 per month.  So at a certain pointless really is more, especially when it comes to spending your precious lifetime – a limited gift from God – on simply sitting there, just watching something.  We were never born to be spectators in life!

Which brings me to the new Fox attempt to lure you into the hip darkness of demonic Satanism – the show Lucifer.  Now I’m the last person to get into a tizzy over artwork.  I know it’s always been controversial, always been edgy, and today more than ever it is meant to challenge our thinking.  But in my experience, I can walk quickly through a major art gallery and skip entire sections because I know the region of the world, and the time period does not offer me what I’m really looking for.  When I want to spend precious hours of my life looking at something creative, I do not want to waste that time on, say, idolatry, or degrading sex, or drugged up brainlessness.  If I find maybe two items in any major art gallery that really capture my imagination, then the effort was worth it.  Because what I’m looking for in artwork isn’t about death, it’s about transcendence.

I want to be deeply moved by the videos I see, and I don’t mean moved to vomit.  I don’t like gross ideas like the human centipede, because that is degrading to human beings.  I don’t enjoy the Fail Blog compilations of people smashing their heads on concrete, because they coax the viewer to laugh at the pain of others.  So much of what’s out there is just not worth the time because you – yes, you – are better than that.  You are a person made in God’s image, after all.

This is why I’m personally satisfied, after watching entirely too much television as a kid, to have missed entire sitcoms once the 1990s began.  Some shows I simply have never seen.  (And the angels sing!)  We have come a long way from three networks, and the astronomical ratings the Charlie Brown Christmas Special used to garner.

So rather than wasting your time trying to coax you to avoid something as obviously lowbrow, and spiritually insulting as Fox’s Lucifer, I’m going to make a different recommendation: Instead, go see something like The Little Prince when it comes to America in the spring.  In fact, watch less stuff in general!  Do more.  And be picky about what you see.  (Not elitist, just wise and more selective.)  There is much to choose from, so choose only the best.  Take the advice of Paul in Philippians 4:8, when he said, “Whatever is true, whatever is honorable, whatever is just, whatever is pure, whatever is lovely, whatever is commendable if there is any excellence if there is anything worthy of praise, meditate on these things.”

2,088
Next
Is Holocaust Denial Really about the Holocaust?