Obama, ’67, and the non-negotiable 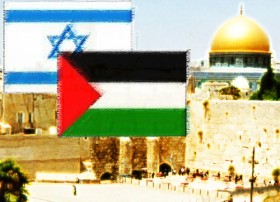 Back when I was a local rabbi, we had two families leave the congregation within days of each other. One family said the congregation wasn’t Jewish enough, and the other said it was too Jewish. If you’re in Messianic Jewish leadership of any sort, you could probably tell a similar story. And you might have responded like I did. I figured that since we were getting criticized from both sides on the Jewishness question, we must be pretty balanced.

But later, after some reflection, I decided that wasn’t really the best explanation.

Rather, both sides were unhappy because we were focusing on the wrong thing. Don’t get me wrong, questions of Jewish identity and practice are really important, and they’re worth discussion and even controversy. But we’re a Messianic Jewish congregation, and the focus should always be on Messiah first, on Messiah as the central, compelling, driving reality around which everything else gets organized. I came to see that we were losing families because we were insufficiently intent on the one thing that mattered above all others—Messiah in us, the hope of glory (Col. 1:27). Get him right, put first things first, and then you can tackle the other tough and important questions far more effectively.

I’ve been trying to process yesterday’s big Middle East policy speech by President Obama, with its headline-grabbing call for Israel to accept its 1967 border as a starting point for negotiations. I know, Obama covered a lot more than that and added some nuance to that position itself. But in the world of global politics and diplomacy, you have to worry about how your words are going to be paraphrased and digested, not just about getting the nuances right. So, sure enough, when I went out to the driveway early this morning to pick up the paper, the main front-page headline was “Obama Calls For Israeli Pullback.” Netanyahu immediately rejected this call, of course, and made a few things clear himself, but it would seem like the damage is done. One Republican congressman, Allen West of Florida, called Obama’s endorsement of the Pre-1967 Borders “the beginning of the end” for the Jewish state (newsmax.com). That’s undoubtedly extreme, but West’s sense of outrage seems pretty reasonable. The Palestinians are drumming up support for a unilateral declaration of statehood in a few months; the Palestinian Authority has made peace with the murderous, rejectionist Hamas and is bringing them into a unity government; post-Mubarak Egypt is abandoning its peace treaty with Israel, and Obama decides it’s time to pressure Israel into making massive unilateral concessions.

But wait a minute! After that, I read a lefty sort of article at Haaretz.com entitled “Obama demolished Palestinian chances for statehood.” Yeah, Obama is trying to push Israel back inside its pre-67 borders, but he didn’t say anything about what he’d do if Israel didn’t comply. And he completely opposed the unilateral Palestinian declaration of independence planned for September, and wants to postpone discussions on the Palestinian “right of return,” and so on.

At first, I thought that the administration might have found a really balanced policy formulation that makes both sides squirm equally. But, as with our “balanced” position on Jewish identity years ago, I’m beginning to think that both sides are unhappy because the policy speech missed the main point—which is the non-negotiable legitimacy of the Jewish state in the land of Israel. Obama alluded to it, but that should be the starting point of the whole discussion. The President can let everyone know that he’s going to put pressure on Israel to negotiate wholeheartedly once the Palestinians and their allies unequivocally affirm the legitimacy of Israel as a Jewish state. Without that, negotiations are pointless, nothing will be settled, and in the end no one will be happy.

Since it’s just before Shabbat, I’ll leave it there and thank God that there’s a day to cease from all such worries and just appreciate what He has already accomplished—including the work-in-progress that is the Jewish state of Israel.

Next
Living In The Past