The Anti-Israel Paris Conference Needs to be “Trumped!” 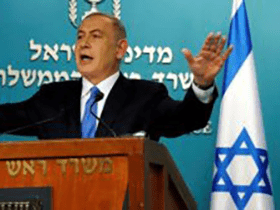 Less than a week before Mr. Obama walks into the sunset–or at least walks out of the White House– further damage to US/Israel relations is still possible. Beyond a shaky relationship that has been crumbling over the past eight years, Israel is a risk once again because 72 world leaders are being manipulated by her fiercest foes. They are about to meet in Paris on January 15 and decide on the fate of the tiny Jewish State. Like a thorn in the flesh of our global village, according to these leaders, Israel must accept and recognize Palestine for her [Israel] own good.

Neither Mr. Netanyahu nor Mr. Abbas will be attending the Paris Conference. Mr. Abbas isn't interested in negotiations (nothing new here) and Mr. Netanyahu, while opened to negotiating, will only do it with no preconditions AND in person with Mr. Abbas. But the world has "a wonderful plan for Israel" even if it leads to its destruction!

Several ambassadors wrote a letter ahead of the conference, explaining why it is in Israel's interest to accept a two-state solution and finally recognize Palestine. They are asking France to lead the way in recognizing Palestine, and this could very well take place on January 15 in Paris, UNILATERALLY.

Last December, in passing resolution 2334, the United Nations officially made the building of settlements in the "disputed territories" illegal and punishable by international law. Not all within the US government were thrilled with the US abstention that facilitated the passing of resolution 2334 by the UN. As a matter of fact, several senators are currently proposing that the UN be defunded of taxpayers money if they don't reverse the measure. President Elect Donald Trump has also expressed his disagreement and has asked Israel to hang tight until January 20, 2017, the official date of his inauguration into office.

We mustn't forget that earlier in 2016, UNESCO decided that the Temple Mount–one of the oldest Jewish site– biblically, archeologically and historically wasn't Jewish but was a Muslim site. Both the UN and UNESCO (as a UN agency) joined by the current US administration are simply ignoring factual, historical truth. In a recent article, journalist Maria Polizoidou said it well,
"The US and the UN – both the Security Council and UNESCO – are not who determine what is historically true and what is not. These shameful votes should be reversed immediately; if not, all funding should be withdrawn from the United Nations, by United States and all freedom-loving democracies. They are now, to paraphrase the words of the Soviet Union's Vladimir Lenin, 'paying for the rope with which members of the UN will hang them.'"

The Paris Conference on Israel/Palestine without Netanyahu or Abbas will possibly lead to a vote in favor of recognizing "Palestine." The two main countries that are interested in such a move are France and the United States (under the current administration.) President Hollande of France will be out in May and Obama will be out in on January 20th. Both are lame ducks and have nothing to lose. They both believe that their legacies would benefit from a declared state of Palestine on their watch. By the end of Sunday, the arrogant world leaders who chose to convene in Paris might have enough momentum to push forward yet another United Nation resolution on January 17, only three days before our new POTUS is sworn in. If they could only take these few facts in consideration:

• The land of Canaan was given to the Jewish people through Abraham, Isaac and Jacob by divine decree in a covenant without preconditions as seen in Genesis 15:18-19: On that day the Lord made a covenant with Abram, saying, “To your descendants I have given this land, From the river of Egypt as far as the great river, the river Euphrates: the Kenite and the Kenizzite and the Kadmonite and the Hittite and the Perizzite and the Rephaim and the Amorite and the Canaanite and the Girgashite and the Jebusite.”  Geographically speaking the real estate includes much more than current Israel even if you add the Gaza Strip and the West bank back in. They might not believe that the Bible is a binding document, but they will find out soon enough that it is!

• The two-State solution isn't an option for the Palestinians. Any map of "Palestine" published by the Palestinian side includes all of Israel "from the River to the Sea" with no room for Jews.

• Israel became a state on May 18, 1948 after being voted in by the United Nations and back then Palestinians didn't exist.

• No other sovereign state ever had to give land conquered at war back to the enemy except for Israel. The territory gained during the Six-Day War isn't to be returned unless Israel wishes to commit a geographical suicide.

The hatred of the Jews existed long before Israel was reborn. The voluntary or forced shrinking of the Land of Israel will never stop those who loathe the Jews from hurting them in the Land or anywhere else in the world. For anybody to think that Israel is the biggest obstacle to world peace in general and Middle East peace in particular is ludicrous. This is a false premise historically, geographically, archeologically, politically AND last but not least…Biblically. How could these 72 countries ignore the carnage in Syria, the ethnic cleansing in so many other parts of the world and the myriad of crimes against humanity committed daily, and yet, concentrate their effort on pushing the Jewish state off the cliff?

But then again, there is always a chance that the whole thing will get "Trumped" in a few days. President-Elect Donald Trump has been called a "Nazi", "Hitler", a "Racist" and many other names. He has much on his plate and many opportunities to show his true colors early. He might surprise us all.

Next
Above All … Love