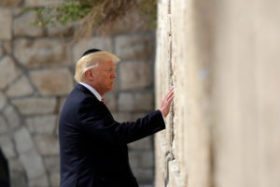 After less than a year in office, Donald Trump has done more to restore America's relationship with Israel than in the 8 years of the previous administration. These days, supporting Israel is a dangerous proposition for anybody from governments to institutions, to organizations all the way down to individuals.

Over the last few decades, Israel has become a pariah state in the Middle East and much of the rest of the world. Supporting the Jewish State is often seen as racist or colonizing.

Lasting peace between Israelis and Palestinians appears as the Holy Grail of global diplomacy. There hasn't been a US President since the rebirth of modern Israel in May of 1948 that hasn't endeavored to bring peace between Israelis and Arabs in the volatile Middle East. They all tried different methods, and they all pretty much failed, even if some degree of success was attained, like the Peace Treaty between Egypt and Israel under Jimmy Carter.

Donald Trump is probably the most controversial and the most vocal President in the history of the United States. We are even seeing more polarization in America than what we experienced under the Obama administration. Yet in spite of all this, Mr. Trump remains a strong supporter of Israel in many ways, while still seeking to remain an influence on a Middle East peace process, if at all possible.  Amazingly, over 75% of US Jews did not vote for nor support Mr. Trump. Here are a few of Mr. Trump's recent moves related to Israel:

At first glance, some would accuse Mr. Trump of favoritism towards Israel, maybe blaming the fact that some of his family members are Jewish. But there might be another reason why the current US President shows so much support for the Jewish State, and that one has a biblical foundation. Vice-President Mike Pence has been very open about his beliefs. As an evangelical Christian, he understands that the Bible is replete with positive references about Israel and Jerusalem. Is it possible that Mr. Pence's biblical worldview might be influencing President Trump? I am not implying that America has now turned into a country led by evangelicals, but what if, for the first time in decades, there was a strong biblical influence in the White House? Some even believe that President Trump has become an evangelical Christian himself.

One doesn't need to be a supporter or opponent of the Trump administration to admit that Israel is very important to our current President. Is it true love or biblical obligation? as we can read in the Abrahamic Covenant of Genesis 12:3 "I will bless those who bless you, I will curse him who curses you," God made a covenant with Abraham promising to bless those who bless his descendants through Isaac and Jacob and the twelve tribes of Israel, i.e.: The Jewish people. If indeed, Mr. Trump chooses to align his foreign policy towards Israel with biblical truth, he is fulfilling the Abrahamic Covenant. Time will tell how God will bless Mr. Trump and even America, but the biblical promise of blessings received for blessing Israel eternally stands. Thank you, Mr. Trump!

Next
Hope for the Hopeless