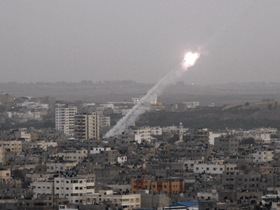 I am well aware that I run the risk of being accused of stating the obvious by saying that there is a crisis in the Middle East. There is nothing new in that statement, yet it bears repeating. I do not see why the conservative fact-finding people should stop telling the truth and let liberals indoctrinate the masses with lies. We need equal footing on that war front if we want a chance at victory.

The Middle East crisis is a geopolitical, economic, political AND spiritual battle. Because of all its different aspects, it makes it very complicated to control, let alone resolve. Yet there is another aspect of the crisis that we must not ignore. I believe that it actually is at the core of the issue and that understanding it gives us the best chance at beating the beast. The Middle East suffers from a lack of moral equivalence. Until the West understands that dichotomy between them and us, we have no chance of making real progress.

As I am writing this commentary, I am constantly (on purpose) interrupted by the buzzing of the Red Alert app on my smartphone. This free app alerts me in real-time when a terrorist fires rockets, missiles or mortars on Israel. For each one, I stop and pray for God's protection on Eretz Yisrael and my people. It's the very least I can do in the comfort of my American abode.

As I watch the events unfold on several fronts in the Middle East, I can hardly find words to describe my feelings about the way it is all reported. It seems that no matter what Hamas/Fatah does against Israel absolutely doesn't matter anymore. It is nauseating to see the reports. Has the Middle East become this "Bizarro World" where everything is inverted? And why do people around the world not care or even worse, take sides against Israel? I come to wonder: Is the rest of the world suffering from a lack of morality while the Middle East suffers from a lack of moral equivalence?

For those of you interested in the truth and willing to compare facts from both sides, consider these:

USE versus SANCTITY OF CIVILIAN LIVES

• HAMAS: According to Hamas spokesperson Sami Abu Zhuri, Palestinian human shields are a very good method to defend their territory. They also shoot missiles and rockets from areas in the midst of large civilian communities. To Hamas and the rest of the Islamist factions in the Middle East, human life is a very disposable commodity.
• ISRAEL: The IDF go out of their way to protect civilians BOTH Israeli AND Palestinians. They often send out leaflets or messages to cell phones to alert the civilian population ahead of time, before they hit an area. The IDF will actually cease firing if they notice Palestinian human shielding on rooftops. Not to mention the many Palestinian lives saved in Israeli hospitals in the midst of their obligations to their own citizens. It was even Mahmoud Abbas in recent weeks that had his wife treated in an Israeli hospital while rockets were raining onto Israeli soil. Such hypocrisy!

GLORIFICATION versus PUNISHMENT OF MURDERERS

• HAMAS: Hamas is glorifying the perpetrators of the kidnapping as it has also been elevating other terrorists recently released from Israeli prisons to the status of "heroes". In some cases, they even name streets after them. Imagine walking the streets of Berlin today and finding yourself at the crossroads of Hitler Boulevard and Goebbels Avenue! Of course, Hamas has also vowed to kidnap more Israelis. That is the Hamas that has "reconciled" with Fatah and by association is receiving funding from many western nations including the USA.
• ISRAEL: The Israeli government doesn't play games when it comes to bringing the perpetrators of crimes to justice, as was just witnessed by the kidnapping and killing of young Arab boy Mohammad Abu Khdeir. The Jewish perpetrators were apprehended and will be brought to justice as Mr. Netanyahu stated in y.net: "I wish to send my condolences to the family of the teen and promise them that we will find those behind this horrific crime and bring them to justice. There is no place for such murders in our society,"

Israel also vowed to do everything they could to bring the murderers of the three Israeli teens to justice. Why shouldn't they, really? Additionally, the mother of Naftali, one of the 3 Jewish boys kidnapped and murdered, sent her condolences to the mother of the Arab boy. Was it reciprocated? Of course not!

DISHONEST versus UNBIASED REPORTING OF EVENTS

• HAMAS: As reported by Palestinian Media Watch or MEMRI, continues to feed the world with false reports, lies and retouched photos in order to gain sympathy from the world, and that, they do well! They recently used the tremendous power of the social networks to post bloody photos allegedly taken in the last few days in Gaza. The postings quickly garnered hundreds of thousands of reposts and retweets. As it turned out, they were old photos taken in Iraq and Syria that had nothing to do with the current conflict between Arabs and Jews in Gaza.
Of course, if that doesn't work, you can try to accuse Israel of opening dams to flood the Palestinian territories. Blaming the weather would be more accurate since the dams in question don't even exist. But hey, who checks for facts anymore?
• ISRAEL: On the other hand, Israel reports the facts and just the facts. Of course, they use caution for security reasons, but they are very straight forward. If a false report creeps in occasionally, it will be denied and corrected rather quickly. Israel is far from being the crybaby of the Middle East. They have been at war since 1948 and as such, they are very used to taking care of business.

The rest of the world has a greater appetite for distorted news stories than for the truth, so they are drawn to the "Palestinian victims" and are quick to discredit and demonize Israel. Is it due to stupidity, ignorance or anti-Semitism? The answer is YES!

As long as the rest of the civilized world – and I use the word "civilized" very loosely – continues to side with bloodthirsty terrorists whose ideology is founded upon a false religion worshipping death, WE WILL NOT PREVAIL. It's that simple!

The lack of moral equivalence between radical Islam and the rest of the world is the number one reason why this war is so difficult to fight, let alone win. The enemies will never adjust their ideology. On the contrary, it will only get worse as we can see with the recent push from ISIS in Iraq and Syria. In the meantime, as the IDF chief of Staff just approved a ground offensive into Gaza, Israel will only count on themselves to defend their borders.

As the enemies are ideologically incapable of toning it down, the rest of us will be forced to flex to their way. This is known as dhimmitude and it is the end of freedom as we know it. Of course, that is without counting on the intervention of Yeshua the Messiah the Prince of Peace (Isaiah 9:6-7). So today more than ever, prayer is of the essence, both for Israel's safety and her enemies' repentance (Psalm 83).