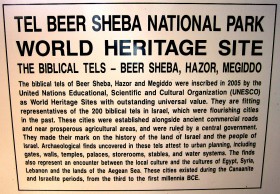 Almost entirely under the news radar, the United Nations Educational, Scientific, and Cultural Organization (UNESCO) has voted to deem a geographically undefined ‘Palestine’ worthy of becoming a full member state, on the basis of its supposedly rich cultural heritage.  This vote, which passed by an overwhelming majority against the will of the United States, triggers a law that requires the US to defund UNESCO on the basis that, any organization supporting the PLO must be cut off financially.  As a result, the hammer has fallen on UNESCO.

And so, thanks to its own distorted political agenda, designed specifically to interfere with and snub Israel, UNESCO has lost a whopping 22% of its total funding, instantly.  The US is (was) the largest financial supporter of UNESCO, but no more.

UNESCO is a branch of the UN that understands itself to be The Supreme Authority regarding whatever may constitute ‘world heritage.’ Certain sites throughout the nations – both archaeological and natural – enjoy special protection by the UN under the banner of being labeled UNESCO World Heritage sites.

Unfortunately, UNESCO seems to suffer from a strange form of schizophrenia which causes random and nonsensical selection criteria for its awards.  For example, the city walls of Jerusalem, mostly Turkish in construction, are considered an official UNESCO World Heritage site.  Mount Masada, the ancient fortress of Herod the Great, is also a UNESCO site, as is tel Megiddo, the biblical location of the final battle between good and evil.  Each of these antiquities carries historic religious significance.  One would naturally think they ought to be heavily protected.

But also included on the UNESCO list is the White City section of Tel Aviv, built in the 1930s, as well as the Baha’i Gardens of Haifa, built in 1987.  Such high hypocrisy ought to be rarer.  Why not include Gath, the ancient hometown of Goliath?  Or Capernaum, the very hub of Jesus’ ministry in Galilee?  Or perhaps the entire Sea of Galilee itself, a dead volcano filled with fresh water, upon which the greatest religious leader of human history strode?  At the very least a site like Gezer, a sister city to the UNESCO protected Hazor, should be included; after all, both bear the markings of King Solomon, and the Gezer Calendar was unearthed on the non-UNESCO site.

But no, somehow those sites and countless others – Beit She’an, Caesarea, even Qumran – are scandalously overlooked.

So why the gross neglect?  It has to do with politics and anti-Zionism.  Certain sites located in the contested territory which might merit UNESCO protection are the following:  The Cave of the Patriarchs, the Tomb of Joseph, the towns of Shechem, and Bethlehem.  But as with everything in Israel, these are simply too Jewish.

So UNESCO, in granting legitimacy to a borderless ‘Palestine’ has saddled the Palestinian people with – of all things – the responsibility of caring for these sites.  This seems madly out of touch when you take into account the way in which Palestinian protesters have violently defaced, spray-painted, and burned such places as Joseph’s Tomb. What great cultural caretakers they are sure to make.  The entire maneuver makes UNESCO into a farce.  Wasn’t the purpose to protect these sites from destruction?

Yet Israel, home of the finest archaeological body in the world – the Israel Antiquities Authority – is humorously not a member of UNESCO, even as a full and formal voting member of the United Nations in good standing.  (UNESCO stripped Israel of its membership in 1974 when Israel dared to excavate parts of Jerusalem.)

Welcome to Alice in Wonderland.

The UN now has a great conundrum on its hands, not surprisingly.  On one hand you have a rogue non-nation vying for membership by way of manipulation; on the other hand, you have Israel, a masterful protector of ancient artifacts left entirely out in the cultural cold.  This can only really hurt one side: The Palestinians.

By trying to force their way into the UN through a side gate, they have also forced the defunding of the very organization which they seek to use as leverage to gain full UN membership, the very same UN body which keeps occupied territory safer through funding from America.  Perhaps next, the Palestinians may try to wedge their way into the International Atomic Energy Agency (IAEA), or some other branch of the UN, to set a further precedent.  But if that happens, the US may be forced to defund that agency as well.

Where would it stop?  HaShem only knows.  But one thing is certain:  Isolating the United States through monkey business voting is not the best way to get what you want.

And it certainly won’t cause Israel to disappear any time soon either.

Next
Gilad Shalit: Is He Worth It? Yes I Believe He Is…