Yeshua is the Lamb of God 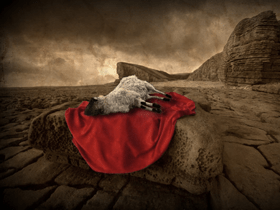 The Lamb of God was predicted in the Old Testament, from the very first lamb that was slain.

From the time in Genesis 3 when Adam and Eve first sinned, their sin needed to be atoned for.

The wages of sin is death.  God, in his gracious love, chose an innocent animal to atone for their sin by shedding its blood.

The animal whose skin was used to cover their nakedness may even have been a lamb.  God may even have sacrificed the animal in front of Adam and Eve.

By oppression and judgment he was taken away.
Yet who of his generation protested?
For he was cut off from the land of the living;
for the transgression of my people he was punished.
He was assigned a grave with the wicked,
and with the rich in his death,
though he had done no violence,
nor was any deceit in his mouth.

Yet it was the LORD’s will to crush him and cause him to suffer,
and though the LORD makes his life an offering for sin,
he will see his offspring and prolong his days,
and the will of the LORD will prosper in his hand.
After he has suffered,
he will see the light of life and be satisfied;
by his knowledge my righteous servant will justify many,
and he will bear their iniquities.
Therefore I will give him a portion among the great,
and he will divide the spoils with the strong,
because he poured out his life unto death,
and was numbered with the transgressors.
For he bore the sin of many,
and made intercession for the transgressors.

Then the high priest stood up and said to Jesus, “Are you not going to answer? What is this testimony that these men are bringing against you?” But Jesus remained silent.

The high priest said to him, “I charge you under oath by the living God: Tell us if you are the Messiah, the Son of God.”

“You have said so,” Jesus replied. “But I say to all of you: From now on you will see the Son of Man sitting at the right hand of the Mighty One and coming on the clouds of heaven.

When they hurled their insults at him, he did not retaliate; when he suffered, he made no threats. Instead, he entrusted himself to him who judges justly.

We see a lamb that was brought to death, sacrificed for our sins.  After being nailed to the cross in agony for hours, immediately prior to giving up his life, Yeshua said, "It is finished".  He was the final atonement.

John said, "Behold the Lamb of God who takes away the sin of the world".

An angel of the Lord appeared to Joseph in a dream and said, "Joseph son of David, do not be afraid to take Mary home as your wife, because what is conceived in her is from the Holy Spirit.   She will give birth to a son, and you are to give him the name Yeshua,  because he will save his people from their sins."

John 1:11
He came to that which was his own, but his own did not receive him.  Yet to all who did receive him, to those who believed in his name, he gave the right to become children of God.

Israel was provided the Lamb of God, their Messiah, yet they rejected him.

The Good News is that Isaiah 53 is talking about Yeshua, who has come to be the Lamb of God, a lamb without blemish, to be killed to take away our sins.

God's purpose for us is that we be saved.

When we by faith place our trust in Yeshua alone, believing that he died for us personally, then Bible tells us that he comes into us and saves us so that we should not perish but have eternal life.

Early on the third day, Yeshua conquered death by rising from the dead.  The stone was rolled away and he walked out of the tomb where his body was laid.

We are passed from death to life through the finished work of the Lamb of God, Yeshua.

Next
On Palm Sunday, Yeshua Revealed Himself as Messiah