Christian Palestinianism: With Friends Like You Who Needs Enemies? 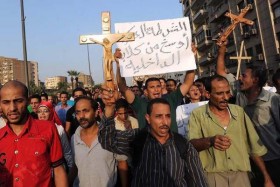 There seems to be a new trend going around within the political arena and garnering quite a bit of support from the Evangelical community. It is known as Christian Palestinianism (CP) and is a new approach to the middle-east crisis that once again has the world fooled into thinking that a solution to the Arab-Israeli conflict can easily be reached. Reconciliation seems to be its primary goal, but many questions arise as to the real catalyst for such a movement?

Could there be a hidden agenda and even another goal than peace? Is Christian legitimization of a Palestinian plight a worthy cause?

Christian Palestinianism opposes and rejects the basic tenets of Christian Zionism. It is antithetical to an honest biblical view of Israel and the Jewish people. As a matter of fact, a historical-grammatical method of Bible interpretation will only lead to one conclusion: God Himself is a Zionist!

For the Lord has chosen Zion; He has desired it for His habitation.

14 “This is My resting place forever; Here I will dwell, for I have desired it.

15 “I will abundantly bless her provision; I will satisfy her needy with bread.

Once again, the liberal camp is leading a pack of “peace activists” who appear to be fully committed to seeing justice (albeit solely from a Palestinian worldview) and reconciliation in the middle-east. Unfortunately, politically correct and tolerant liberals end up promoting the anti-Semitic views put forward by Islamists. Do not miss the irony of a group of people whose liberal ideology encourages them to promote the repressive and dictatorial ideology of another! The potential for a lethal backfiring against Western Civilization seems obvious.

Part of the process of Christian Palestinianism is a progressive removal of the Jewish roots of Christianity. Judeo-Christian ethics are replaced with "Christian" ethics, fully deprived of any of their Jewish heritage. This systematic removal of the Jewish roots of Christianity facilitates the delegitimization of Israel as God’s chosen people and further justifies her removal from the world as we know it, even though this might not be the most apparent agenda.

The Christian policy that would eliminate the Jewish source of Christianity by suppressing the link between the Hebrew Bible and the Gospels represents an old and lingering trend, always opposed by the Church. It was first formulated by Marcion, a second-century Byzantine priest of pagan background who was strongly influenced by Gnosticism. Today, Palestinian Marcionism (Palestinianism) paves the way for the Islamization of the Church as it prepares mentalities for an Islamic replacement theology [1].

Bat Ye’or’s assessment has tragically proven true in the last 5 years. Christian Palestinianism is well on its way to de-judaize Jesus – a job that the gentile branch of Christianity generously contributed to, out of ignorance or pure hatred of the Jews over the centuries. CP will also continue to invalidate much of the Jewish Scriptures as history gets re-written and Jewish references get replaced to accommodate the “Islamization” of the Bible.

Additionally, British expert Paul Wilkinson documents the movement as he traces its origins and agenda:

“Christian Palestinianism is an inverted mirror image of Christian Zionism. All the basic elements of a Christian Zionist eschatology are reversed, so that the Bible is seen to be Christian, not Jewish, the land of the Bible is Palestine not Israel, the Son of God is a Palestinian not a Jew, the Holocaust is resented not remembered, 1948 is a catastrophe not a miracle, the Jewish people are illegal occupiers not rightful owners, and Biblical prophecy is a moral manifesto and not a signpost to the Second Coming. Despite enlisting support from the theological community and seeking validation through academia, the overriding thrust of Christian Palestinianism is political, not Biblical.

A tragic example of this ideology is the recent movie Little Town of Bethlehem that came out in 2010, painting the portrait of three men who wanted peace and reconciliation in the region: an Arab Muslim, an Israeli Jew and a Palestinian Christian. They promoted their views of reconciliation against all odds. Really, who would disagree with that?

The issue does not lie in the validity of such an aspiration but in how the different sides were being portrayed. Palestinians were being compared to African Americans during the Civil Rights Movement following the leadership of Martin Luther King and fighting the National Guard for their freedom, while Israelis were being painted as the oppressors and invaders of Palestine.

It is a shame to see that many Evangelicals are buying into the lies of Christian Palestinianism. Endorsements of such projects by former World Vision US President, Robert Seiple; Stephen Sizer, Vicar of Christ Church in the UK, Lynne Hybels, wife of Bill Hybels of Willow Creek Church or even Gary Burge from Wheaton College, only add insult to injury.

The same can be said for a more vocally Christian project known as With God on Our Side, directed by Porter Speakman Jr. and endorsed by Tony Campolo and current Vice President of World Vision, Steve Haas. It has also received rave reviews from Christianity Today.

With any vestige of the Jewish roots of Christianity eradicated, Israel and the Jewish people will become irrelevant and this is a risk we cannot afford to take!

Palestinianism is becoming the next big wave of Christian anti-Semitism, yet there is a simple solution… READ YOUR BIBLE!

Next
Would you rather have a nuclear Iran than a war?