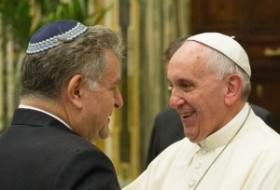 When it comes to Judeo/Christian relations, the Catholic Church carries centuries of baggage from anti-Judaism to anti-Semitism to anti-Zionism. At the Council of Nicaea in 325 CE, the Catholic Church was officially propelled onto the world scene and continued to widen a theological gap between Christians and Jews. A gap that would also become political, sociological and geographical until it came to its apex in the 1930s and 40s when it was given a pseudo-racial twist. Let’s face it, in the Jewish psyche, the Catholic Church is responsible for a lot of anti-Semitism, but be that as it may, not all Catholics are anti-Semites.

This is not a witch hunt against Catholics, yet it must be said that most of the Jewish persecution by the early Church and through the Middle Ages was performed by Catholic leaders who were also the representative of Christianity and technically of Christ on earth. The Crusades, the Blood Libel, the Host desecrations, the Black Plague, the Inquisition, the Pogroms and the Holocaust are all intertwined in a web of deceit that eventually leads back to the Catholic Church on way or another. Much of this was initiated by the Church and progressively picked-up throughout history to become lethal to the Jews as best explained by Holocaust historian Raul Hilberg in The Destruction of the European Jews. He saw the fate of the Jewish people as a three-step process over time: “From the 4th century the Christian missionaries told the Jews ‘you may not live among us as Jews’. The secular governments who followed them from the late middle-aged decided ‘you may not live among us’ and de Nazis finely decreed ‘you may not live’. Hillberg spoke of ostracism followed by expulsion and annihilation. In a nutshell, this is the history of my people.

From the early Church Fathers (200 CE) until 1965, the Catholic Church held all Jewish people corporately responsible for the Crucifixion of Yeshua the Messiah (Jesus.) It wasn’t until 1965, during Vatican II under Pope Paul VI, that the accusation was rescinded. In a declaration known as Nostra Aetate (In our times), Pope Paul VI promulgated that Jews were no longer to be held guilty of deicide (the killing of God.) The hope was that this “Declaration on the Relation of the Church with Non-Christian Religions” would exonerate the Jewish people. Of course it never occurred to the Catholic Church that nowhere in the Bible are the Jews declared guilty of killing Yeshua because in His own words, He gave His own life for all mankind as it is recorded in the Gospel of John 10:17-18, 17 For this reason the Father loves Me, because I lay down My life so that I may take it again. 18 No one has taken it away from Me, but I lay it down on My own initiative. I have authority to lay it down, and I have authority to take it up again. This commandment I received from My Father.”

Additionally, the Catholic Church has long felt that they had replaced ethnic Israel in the plan of God. All the blessings that God had promised to bestow upon Israel would apparently be transferred to the Catholic Church or even to all Christians to speak more broadly. All Covenants made between God and the Jewish people would now apply to the “New Israel” or spiritual Israel. This is commonly known as Replacement Theology, and this also cannot be substantiated by Scripture as long as you apply a consistent, literal and contextual system of interpretation.

While we continue to witness both anti-Semitism and philo-Semitism within the Catholic ranks, there has been an effort from several Popes to reconcile with the Jewish community even further. So much so that the current Pope has now announced that Jewish people do not need Jesus and that the Catholic Church should not try to convert Jewish people. There has been a certain amount of collective Catholic guilt regarding their treatment of the Jewish people. This rather recent reaction or possibly over-reaction, seeing the Jewish people as covenantal people in no need of Yeshua does a lot of good for the healing of Judeo/Christian relations. In a recent statement, Rabbi David Fox Sandmel, ADL Director of Interfaith Affairs reaffirms the importance of such a move by the current Pope: “This new Vatican document is a remarkable reaffirmation of the positive changes in the Church’s teaching about Jews and Judaism since the promulgation of Nostra Aetate 50 years ago. It is significant because it places a very clear emphasis on the rejection of the deicide charge, Christianity’s indebtedness to Judaism, the rejection of replacement theology, and the ongoing validity of the Jewish covenant with God.”

It is true that the Jewish people could easily do away with centuries of Christian anti-Semitism. Unfortunately, Jewish history has been recorded in blood for the most part. That history is part of the Christian baggage that cannot be unloaded. It would behoove Christians to stop believing what they have heard about the Jewish people and not add to this already overwhelmingly heavy baggage. To that end, the 1965 Declaration of Nostra Aetate might have helped somewhat, and the current papacy might even contribute further, unfortunately, the roots of anti-Semitism–Christian or not–go very, very deep!

It is also true that the Jewish people have not been replaced by Catholics, Christians or any other people group who might consider themselves the “New Israel.” That rejection of Replacement Theology was made clear in the declaration of 1965. It might not have been adopted by Catholics the world over, but it remains an “Ex Cathedra” statement by the Pope, and as such should leave no option but obedience to it by Catholics worldwide. Human nature often gets in the way, I am afraid!

And of course, it is of the utmost importance to stop trying to “convert” Jews to Christianity. But is it possible that the reason for such a change is different than what the Pope would expect? Simply put, Jews don’t convert because they have no need to convert. If indeed, Yeshua is the Jewish Messiah (Isaiah 52:13-53-12) then there is nothing more natural for a Jewish person than to follow their Jewish Messiah. It is a personal choice that nobody can force us to make. So in a sense, the Pope is right, Jews do not ever need to convert to Yeshua, yet if it turns out that He [Yeshua] is the Jewish Messiah spoken of by the Jewish Prophets (Gen. 49:10, Isa. 7:14; 9:6-7, Mic. 5:2), then maybe it would benefit the Jewish people to follow Him.

Next
France’s 2nd Chance to Lead the War against Apocalyptic Islam!